Raising the Bar on Public Engagement

Ontario could be on the verge of changing Canadian politics. Premier Kathleen Wynne wants to find a principled way to give citizens and stakeholders a more meaningful voice in the policy process. To see how and why, let’s start with two examples where conventional policymaking has failed.

In the run-up to the Alberta election, Premier Jim Prentice promised to make some tough budget decisions to help the province deal with plummeting oil prices. Albertans were told to brace for the worst.

Prentice then delivered a budget with only modest program cuts, no sales tax, higher personal taxes, and no increases to business taxes. Reactions ranged from confused to incredulous. Many concluded that Prentice talked a good game, but lacked the instincts of a real leader. And the rest, as they say, is history.

In 2010, New Brunswick Premier Shawn Graham announced that his government would sell New Brunswick Power to Hydro-Québec. The sale would have allowed him to pay off the utility’s debt, while freezing energy prices for homes and businesses for five years.

Graham thought it was a slam-dunk, but when he told New Brunswickers, they felt otherwise. Support for the premier and his government collapsed, making Graham the first one-term premier in the province’s history.

Prentice and Graham are not the only premiers to make disastrous choices, but I think there is a special lesson here. If they badly misread the public, it was not just on policy, but also on process.

Despite all the talk about tough choices, Prentice saw no reason to ask Albertans what kind of balance they thought was needed or fair—whether, for example, businesses really should get a free ride or if it was finally time for an Alberta sales tax. As for Graham, he declared out of the blue that he was going to sell the province’s crown jewel, without giving the public so much as a hint of his intentions. What made these leaders think the public would simply go along with their plans?

In the traditional view, premiers and prime ministers are elected to make such decisions, and they usually do so behind closed doors. That’s what Prentice and Graham did. Over the last couple of decades, however, public expectations have been changing. As the world has shrunk and the pace of change has accelerated, issues have become entangled, messy and diffuse. The impact on traditional governance has been profound.

In particular, backroom decision-making has become very risky. Leaders eventually have to explain their choices to citizens, stakeholders and journalists. Trying to walk them through the rationale behind, say, a decision to build a pipeline through an environmentally sensitive area can be a communications nightmare. There are just too many factors at play, too many trade-offs that must be made, too many ways that things could have been done differently. In the end, citizens who disagree with the government’s approach are often left feeling that the decision was arbitrary or worse, that the government had its mind made up from the start.

As a result, public tolerance for top-down, backroom decision-making has plunged and is being replaced by a growing appetite for openness, transparency and participation. Whether it is Parliament’s secretive Board of Internal Economy or a proposed pipeline across the interior of British Columbia, the writing is on the wall. Policymaking in the future will require more public involvement. Giving citizens and stakeholders some responsibility for making trade-offs and setting priorities invests them with a sense of ownership of the decisions, which, in turn, ensures transparency and legitimacy.

If governments have been slow to embrace this change, it is because of a misplaced fear that public engagement could turn control of their agenda over to interest groups; or that the “dialogue” will quickly degenerate into a free-for-all that paralyzes decision-making or saddles the government with bad policies.

In fact, a growing body of work shows that when such processes are properly designed and executed, far from undermining good governance, they can make a major contribution to it. Citizens and stakeholders bring all kinds of knowledge and experience to the table that can greatly enhance a government’s ability to make decisions. This also ensures transparency.

Governments that resist this trend and insist on doing things the old way risk provoking mistrust, resentment and conflict—and turning the next election into a referendum on the leader’s governance style. Ask Prentice or Graham. Had they taken the right steps to engage the public beforehand, things might have turned out very differently.

But once a leader decides to engage people this way, how much of a say should they get? There is no single answer to this question, no one-size-fits-all approach to public engagement. There is a range of possibilities here, which goes from a simple opportunity to express a view to having the authority to veto or make important choices, and various options in between.

If the choice between these options is not to be arbitrary or capricious, there must be an authoritative and principled way of matching the right process with the task, which brings us to Ontario.

In October 2013, Premier Wynne announced a nine-person Open Government panel to develop recommendations to make Ontario “the most open and transparent government in the country” (full disclosure: I chaired this group).

In Canada, Open Government is defined through three separate streams of activity: Open Data, Open Information, and Open Dialogue. Open Data calls on governments to make their data holdings available to the public to support transparency and evidence-based decision-making. Open Information calls on governments to advance freedom of information. Open Dialogue recognizes the need to engage the public more directly in the policy process, especially through the use of digital tools. In this view, Open Government results from the convergence of these three streams. (see Figure 1) Now, Open Information has a long history in Canada and abroad, especially through Freedom of Information legislation. And over the last five years, the Open Government movement has made much progress on Open Data. Rather than re-invent these wheels, the Wynne government asked the Ontario panel to spend most of its time thinking through the issues around the third stream, Open Dialogue. As the discussion progressed, its critical role in Open Government became increasingly clear. 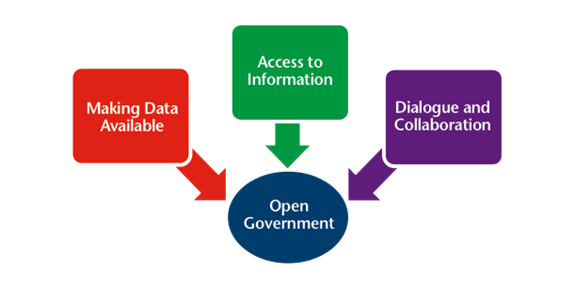 The three streams are not just different aspects of Open Government. They are also identified with relatively distinct communities of practitioners, each with its own history, interests and skills:

The emerging lesson from these discussions is that, if Open Government is to succeed, it requires a pooling of knowledge and skills from these three communities. The movement needs technology people, data analysts, journalists, political strategists, facilitators and community activists. Getting these different communities aligned and working together to advance the goals of Open Government is a huge task. If real progress has been made on Open Data, the priority now is to advance Open Dialogue through innovative forms of public engagement.

In its final report, Open by Default, the panel addressed this need by calling on the Ontario government to launch a series of demonstration projects to test and explore different forms of dialogue and engagement; and to systematize the learning into a policy framework that could guide future development of Open Dialogue processes across the whole government.

Deb Matthews, Deputy Premier and Minister for Open Government, recently confirmed the Ontario government’s intention to act on this recommendation. According to Matthews, the Wynne government is preparing to take “an important step toward Open Dialogue with the development of a public engagement framework…We will also launch a series of demonstration projects…to engage Ontarians in how to move forward on some of our core priorities.” (See “Canada 2020 Open Government Forward,” by Deb Matthews, in Setting the New Progressive Agenda, at Canada2020.ca). Matthews’ project is set to be launched by the end of 2015.

This appears to be the first time a major government anywhere has committed to such an Open Dialogue project. The Wynne government thus looks poised to raise the bar on Open Government for the movement as a whole. A lot of people will be watching with interest.

Dr. Don Lenihan is Senior Associate, Policy and Engagement, at Canada 2020, Canada’s leading, independent progressive think-tank. Don is an internationally recognized expert on democracy and Open Government. His recent projects include chairing an expert group on citizen engagement for the UN and the OECD; and chairing the Ontario Open Government Engagement Team. The views expressed here are those of the columnist alone. Don can be reached at: Don.Lenihan@Canada2020.ca or follow him on Twitter at: @DonLenihan