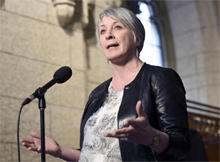 No specific proposals have been outlined yet.

The announcement provided no details on how or when engagement would be held. Their focus would be on modernizing the Primary Agriculture Stream of the Temporary Foreign Worker Program (TFWP) to address key issues raised during consultations earlier this year.

The message in those consultations was to simplify the Primary Agriculture Stream and make it easier for farmers to understand their obligations under the Program, the department said.

It also wants to look at “how to set wages for agriculture workers to allow for increased transparency and more flexibility for employers to offer raises and bonuses to workers and work with provinces and territories to improve housing for foreign workers to ensure consistency across the country.”

Modernizing the TFWP will “help to ensure that the labour needs of Canada’s evolving agriculture sector are met, while supporting the domestic labour market and protecting foreign workers.”

The Canadian Federation of Agriculture, which co-chairs an TFWP service delivery working group that includes several government departments, hasn’t been informed of any specific plans, a spokesman said.

The working group “brings a number of key farm groups to the table every two months for ongoing dialogue around current issues facing agricultural users of the TFWP as well as any forward-looking changes.”

CFA expects simplification and wages will be key items in the discussion is finally they have been referenced before by government officials, the spokesman said.

The government announcement said the TFWP “is an important tool to support the sector in filling vacant and seasonal positions when qualified Canadians and permanent residents are not available.”

But it didn’t acknowledge the persistently high levels of job vacancies in the agriculture sector in recent as the Canadian Agriculture Human Resources Council (CAHRC) has documented.

It said earlier this year that a growing shortage of workers has already hurt agriculture production and will limit future growth and delay expansion plans.

In 2017, 16,500 agriculture jobs went unfilled costing the sector $2.9 billion in lost revenues, or 4.7 per cent of product sales, the Council said. Unable to attract Canadians to fill the jobs, farmers have increasingly tried to recruit foreign labour, which now accounts for 17 per cent of the sector’s workforce.

The Council says hiring foreign workers is hampered by federal regulations, which fail to appreciate the problem of worker shortages or its implications for the national economy.

However Labour Minister Patty Hadju said, “Our goal is to ensure that the TFWP keeps Canadians first in line for available jobs, is responsive to the needs of the Canadian job market and protects the rights of vulnerable workers. We cannot effectively develop programs without the input of the people who use them. That is why we are working together with our key stakeholders to modernize the TFW Program to meet the evolving labour needs of the agricultural sector.”

An ESDC spokesman said the department intends to continue to consult the agriculture sector and further review the results of its earlier review of the sector.

The CAHRC will be invited to participate in the engagement.

One issue that will be examined further is the provision of suitable housing for foreign workers. Housing shortages are considered to be a chronic problem across rural Canada as well as in many urban areas.