Maple Leaf has achieved carbon neutrality in its food-processing operations 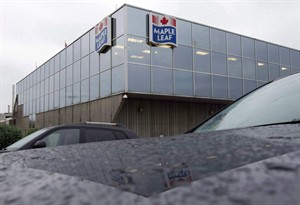 It plans to encourage its suppliers to work to the same goal.

Ottawa–Maple Leaf Foods has become the first food company to reach carbon neutrality in its processing operations and wants to encourage its meat, grain and other suppliers to work toward the same goal.

Michael McCain, President and CEO, told a Nov. 7 news conference that the company decided in 2017 to change its operations to become carbon neutral and turn into “the most sustainable protein company on Earth.”

Two years before that it hoped to reduce its environmental footprint by 50 per cent by 2050. Reaching carbon neutrality was a long process, he said, but “its an enormous milestone to achieve.

“But, with the urgency of the climate crisis, we felt compelled to act and take our biggest and boldest step ever by becoming the first major food company in the world to become carbon neutral,” he said.

As part of its concern about the impact of the global food system on the environment, Maple Leaf “will work with all of our suppliers and encourage them to reduce their own emissions,” McCain said. He did not offer any specifics about how meat and grain suppliers would be encouraged.

“Today’s actions are not just about being socially responsible; they are about survival. Consumers rightfully expect business and political leaders to solve these problems and address the profound consequences of our climate crisis.”

Mississauga-baaed Maple Leaf has about 12,5000 employees and provides prepared meats, ready-to-cook and ready-to-serve meals, valued-added fresh pork and poultry and plant protein products to customers in Canada, the U.S. and Asia.

McCain said the company based its carbon neutral campaign on the Science Based Targets program connected with Paris Agreement on Climate Change. “We hope our actions inspire food companies and businesses broadly to join us in the critical fight against climate change.”

‘There is simply no more time to waste,” he said. “The devastating impact of climate change on our planet must be confronted head-on by business leaders with decisive and immediate action.

“The global food system must change dramatically if we are to sustainably feed the world’s growing population. We recognize that producing nutrient-dense foods takes vital planetary resources, and we are staking our future on being carbon neutral today, and every day going forward.”

It plans “to work even more aggressively to reduce greenhouse gas emissions across its operations and more broadly within its supply chain,” McCain said.

It has invested in wind energy, recovering methane gas from landfills, composting and biomass programs to reduce methane emissions, and forest protection and re-forestation to conserve species and biodiversity.

It focused on reducing emissions from its facilities across the country and from its energy sources. He said it is now looking at the environmental footprint of its suppliers. “We don’t control our livestock ands grain suppliers. But we’ll ask them to join us on this journey.”

McCain said the company plans to keep working on reducing “its remaining emissions. Our younger customers are clearly interested in environmental impacts.”