Climate and Economy – Can we Build a Shared Narrative?

Ottawa is rumoured to be working on an ambitious stimulus package for the recovery phase of the COVID-19 pandemic. The plan, apparently, will be green. So, has the Trudeau government given up on the oil and gas industry?

In his first mandate, Justin Trudeau declared that balancing the environment and the economy was a signature policy of his government. By the end, this meant buying and building the Trans Mountain Pipeline to ensure access to markets for Alberta’s oil, while reducing greenhouse gas (GHG) emissions through a carbon tax and tougher regulations on the industry.

The approach seems to have done as much to divide the country’s leaders as to unite them. Who can forget “The Resistance” photo on the cover of Maclean’s? The stimulus package will send a signal whether the government still believes in a balanced approach.

Narrative plays a critical role in this calculation. Consider climate change. Someone who puts a high value on the short-term priority of preserving jobs will be more willing to live with the risk of melting glaciers than someone who cares passionately about the well-being of future generations. These people can look at the same facts and studies yet draw opposing conclusions about how best to respond – and that’s where narrative comes in.

Each side will have a story to tell about why they see things as they do. These stories are more than collections of facts and arguments. An effective narrative is like a textured picture – a map – of how subjective factors, such as values and priorities, fit together with objective ones, such as data and facts. And this can make an informed exchange of views difficult and divisive.

But if narrative often divides people, it can also unite them. A “shared narrative” is a story that is created by combining or integrating different – and often competing – narratives. A successful shared narrative establishes common ground so that people who disagree can start discussing their differences in ways that both sides are more likely to see as respectful and fair.

If the Trudeau government is still committed to the oil and gas industry, its primary challenge lies in narrative building. Canadians will need a shared narrative that shows how support for the industry can be part of a single coherent plan to build a sustainable economy.

Is such a story even possible? Perhaps, but it will take some imagination. Let’s start by reminding ourselves where we are.

The United Nation’s International Panel on Climate Change relies on thousands of leading climate scientists from around the world to investigate and report on climate change. The 2018 IPCC report delivered an extraordinary and deeply disturbing message to the world, declaring that:

The news is bad. Even if we keep the temperature increase to between 1.5° and 2°C, the consequences will be dramatic, including increases in extreme weather, melting polar ice caps, rising sea levels and flooding in coastal areas, widespread extinction of species and other loss of biodiversity, including up to 90 per cent of the world’s coral reefs. The difference in impacts is striking as the temperature climbs from 1.5° to 2°.

G20 countries are the main cause of global warming, accounting for 78 per cent of GHG emissions. The four biggest emitters are China (28 per cent), the United States (14 per cent), India (7 per cent), and Russia (5 per cent). Canada is responsible for about 2 per cent of GHGs and, under the Paris Agreement, has committed to reduce these to 30% below 2005 levels by 2030. A recent United Nation’s Emissions Report states that Canada is currently expected to exceed its targets by 15 per cent.

The environmentalists’ narrative on climate change is built from facts like these and can be summarized as follows:

The world is hurtling toward global catastrophe. Urgent action is the only way to mitigate the consequences and this requires a massive and rapid transition to renewable energy, and the immediate and decisive reduction of GHG emissions.

The Oil and Gas Industry Narrative 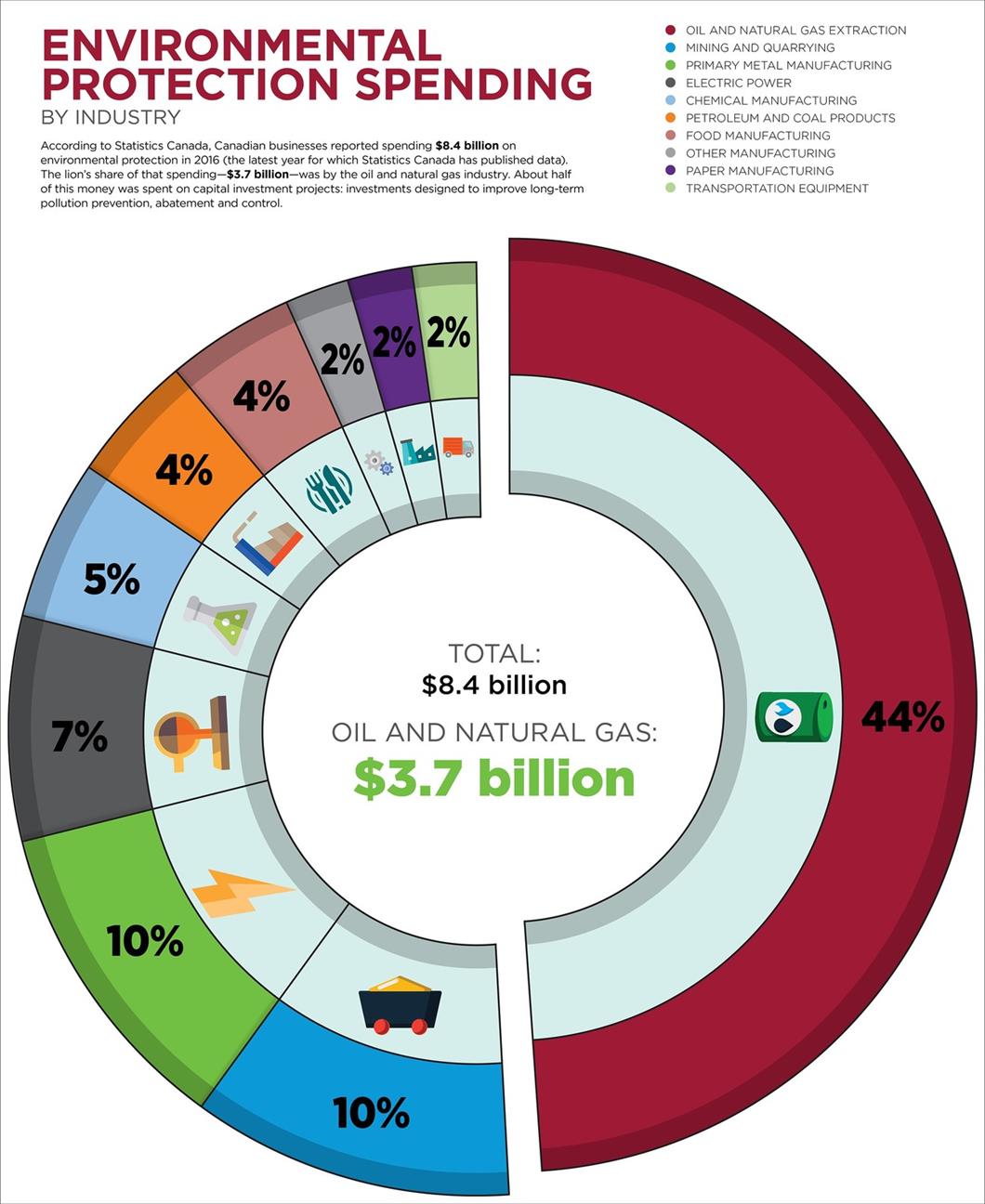 The “industry narrative” on climate change is neatly captured in a recent article in Inside Policy Magazine, where Ken Coates argues as follows:

Canada requires a climate change agenda, just not the one that environmentalists are calling for. There will be no immediate transition to a renewables-based economy, however much proponents of the so-called Green Economy might like it. The only realistic path forward is to recognize that Canadian-produced oil and gas will remain a major part of Canada’s energy supply and that the energy sector is an integral part of the climate change planning process, not opponents of the search for an effective transition to a more sustainable economy.

The COVID-19 Recovery: A Window of Opportunity?

In the last few weeks, the COVID-19 pandemic may have tipped the scales on this debate. As world leaders make plans to restart their domestic economies, there is growing support for the view that this is a unique opportunity to accelerate the transition to a green economy:

But if pressure is mounting for a green recovery some of these advocates are also concerned about deepening the tensions between different regions. Resilient Recovery, for example, insists that a green recovery plan “can’t leave any sector or region behind.”

In fact, many westerners are feeling left behind. Oil is at rock-bottom prices and demand has plummeted. The Government of Alberta has been calling on the federal government to come to the industry’s aid – to the tune of about $30 billion – but so far, Ottawa has provided a package for about $2.5 billion. Lots of people out west are unimpressed and there is genuine concern about what might come next.

So, has the government concluded that it must choose between a green agenda and supporting the oil and gas industry or is a balanced approach still possible?

Is there Middle Ground?

Some see reasons to be hopeful that a balance can be struck:

For example, a Positive Energy survey finds that most Canadians support (29 per cent) or somewhat support (26 per cent) growth in the oil and gas sectors. Indeed, 60 per cent say they would be more supportive of fossil fuel energy if Canada had more proactive climate policies (26 per cent agree, 34 per cent somewhat agree). This suggests there is room (and openness) to align these views in new ways that could lead to a balanced approach – a shared narrative may be possible. 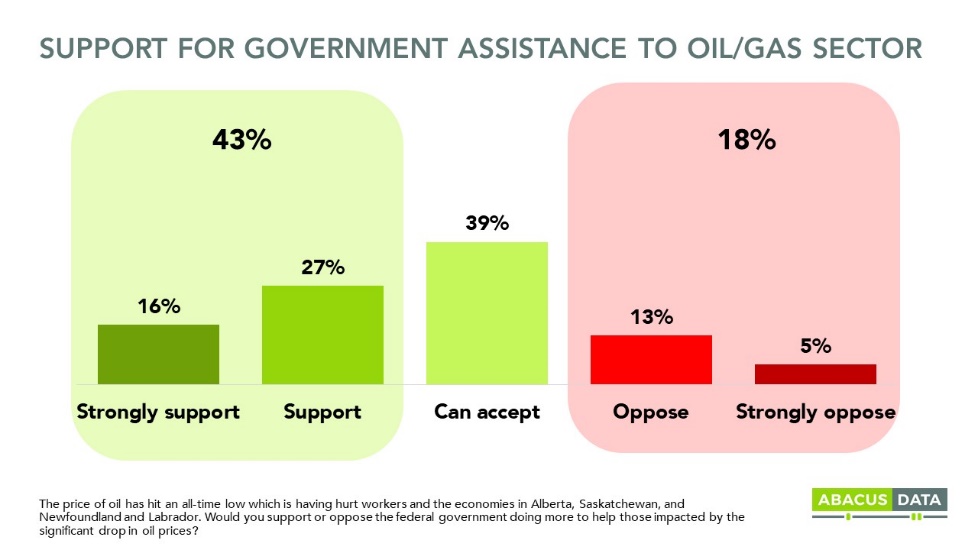 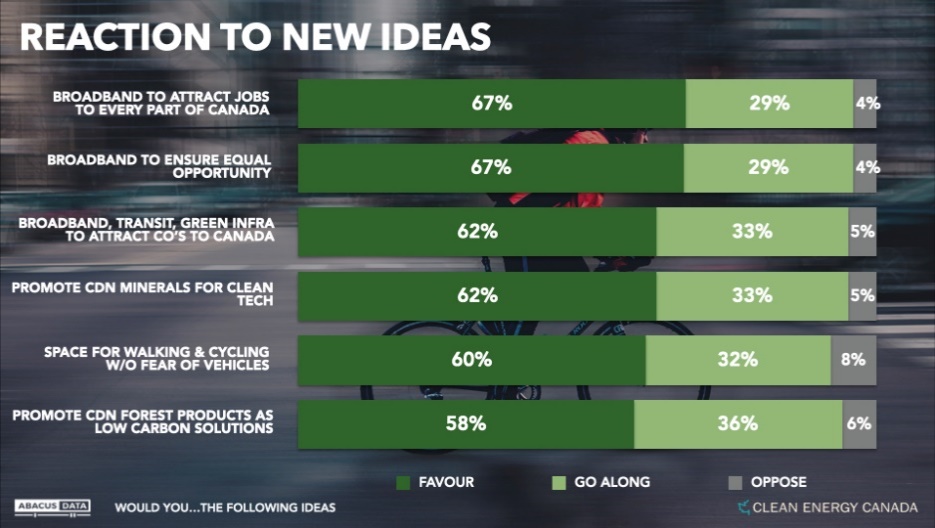 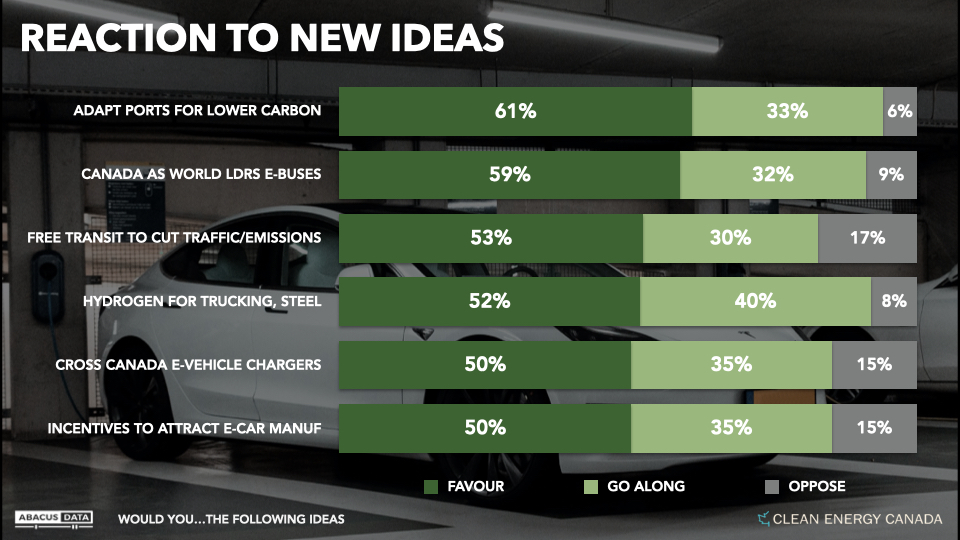 An apparent lesson from such research is that, while the views of advocates may be increasingly irreconcilable, Canadians still seem open to the idea that the government can find ways to go green that do not exclude the oil and gas industry – and the tens of thousands of Canadians who depend on it.

However, if those Canadians in the middle are to avoid being pulled to the extremes, they need a single, consistent story to tell about how the two sides fit together. Clues about this storyline can be found in some of the options already being discussed.

For example, an Alberta task force is looking at hydrogen, which can be extracted from Alberta’s Oil Sands. As Adam Radwanski notes, hydrogen is a potential future energy source for heavy industrial transportation, such as trucks. And if governments invested in hydrogen infrastructure in key regions, such as fueling stations, this could help establish the demand needed to encourage nationwide scale-up and exports.

Other options for aligning industry and the environment more closely include geothermal energy, and carbon capture and storage. The IPCC 2018 report shows that carbon removal is necessary for moving to net-zero emissions and for producing net-negative emissions to compensate for any overshoot of 1.5˚C.

A Shared Narrative on Climate Change

Storytelling is both a basic human skill and a social need. People can hear a story once and remember it, sometimes for the rest of their lives. Moreover, a good narrative “travels.” People like to tell stories, talk about them, and hear new ones.

Most importantly, narrative helps people understand the unknown and adjust to the unfamiliar. It uses metaphors, images, mood, and dramatic tension to make sense of complex situations and to help people navigate through them. If Canadians are to make the most of the recovery period ahead, we need a story to tell about how our economic future can bring us together as a country. It is the role of politics to provide one.

JOIN OUR LIVE DEBATE: The Institute on Governance will host Don Lenihan and Professor Monica Gattinger to debate these issue live online on Tuesday, June 9th from 9:30 to 11:00 am. Registration is free at: https://iog.ca/events/dialogue-debate-environment-economy/

Dr. Don Lenihan is Senior Associate at the Institute on Governance. He is an internationally recognized expert on public engagement, governance, and policy development. Don has over 25 years’ experience as a project leader, researcher, writer, senior government advisor, and facilitator. For more, visit his website at: www.middlegroundengagement.com