The Second Wave: Why decision-making has never been harder – or more important – for leaders like Doug Ford 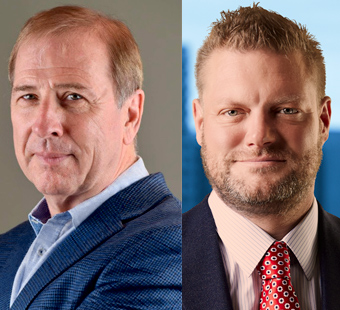 When the pandemic first hit, none of us knew what to expect. Medical experts called for a lockdown and governments took their advice. This time round it’s different. Our political leaders are being called on to protect both our health and our economy. As Doug Ford noted on Tuesday, that can be an unpleasant place to be.

In his press conference, Ford commented on his decision to reinstate Stage 2 measures in three key regions of Ontario, much as François Legault has done in Quebec. It was, he says, one of the hardest decisions of his career. We get it but, frankly, he should get used to it. Governments everywhere may be called on to make lots more decisions like this in the months ahead.

Businesses are hurting badly, and many are stepping up the pressure on politicians to help them get through these tough times. This is not just about financial support. In Ottawa, for example, business groups have challenged Ford to produce the data that justifies stricter measures. There is a growing sense that politicians have the tools to open the economy without putting the public at risk, but do they?

We think this is a discussion worth having – cautiously and respectfully. We’re not disputing that public health is the No 1 priority. The hard question is whether it can be better aligned with other priorities. A recent poll from the Innovative Research Group helps us get at the issue: 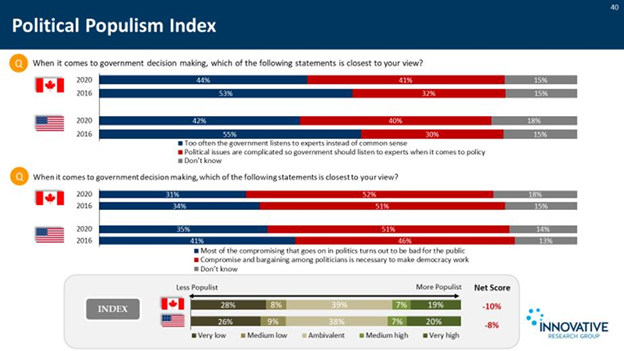 The response to Question 1 caught our attention. It shows that Canadians are almost evenly split on whether they think experts have too much influence on governments. This sheds important light on the tensions Ford is dealing with, and why other premiers will likely face the same issues, as the second wave grows. Some, such as Legault, already are.

Basically, during the first wave, political leaders deferred to public health officials on how to respond to the pandemic. This served us well, but governments have come a long way over the last eight months. New knowledge and new tools like rapid testing and contact tracing now allow leaders to manage the risks in ways that were not possible before.

For example, experts now know enough about how the virus spreads to contain it within a region, so that governments don’t have to shut down a whole province. This is currently the approach in Ontario and Quebec.

However, there is a price to pay for plans like this. Generally, the more complex they get, the less likely they are to be guided by medical science. In Ontario, for example, the government’s decision to shut down bars, restaurants, and gyms while leaving schools open has raised eyebrows.

There are serious questions about how far the science on COVID-19 can help decision-makers assess the importance of getting children back to school. Striking a balance between public health risks and learning involves weighing lots of things that are outside the purview of medical science.

So, how are these tradeoffs getting made?

In a second slide, IRG reveals an important feature of our political culture. The slide uses a scale of 1 – 100 to assess how strongly Liberals, Conservatives, and NDP members feel about the role of experts in government decision-making. The poll finds a 24-point spread between Liberals and Conservatives, with the NDP in the middle. (See the line on Political Populism.) 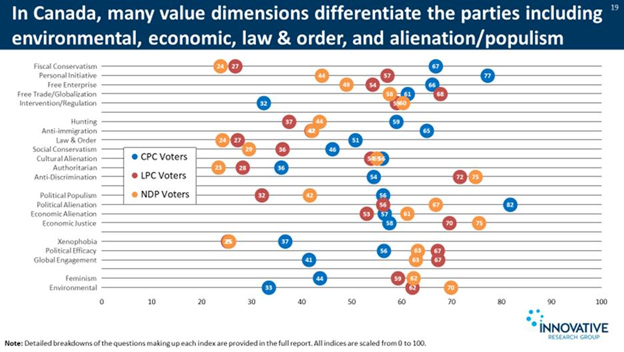 Basically, the data show that our political leaders are predisposed to treat expert opinion differently: progressives are more inclined to accept it and conservatives to question it.

Neither predisposition is wrong, but predispositions of any kind can be a barrier to a thoughtful, informed discussion of the issues. They incline us to trust some views more than others and this can shape how we think and talk about the issues.

This is a critical consideration as the second wave advances. When health experts declare that “the evidence” calls for actions that favour health over, say, the economy, political leaders need a reliable way to weigh this advice against other concerns and priorities. And they shouldn’t look to health experts to provide it.

Health experts view the world through a health lens. Their role doesn’t train them to consider how this affects other priorities, such as the economy or learning. That is what elected officials are supposed to do – but they need a reliable way of thinking through the issues.

As things stand, the poll suggests that these decisions often come down to a leader’s predispositions – whether they are a conservative or a progressive. We don’t think that’s good enough.

Increasingly, our governments are being called on to respond to all aspects of the pandemic, not just public health. Predisposition are not a reliable guide to this. They will not disappear, but we can be conscious of them and keep them in check.

Different priorities should be publicly discussed and balanced against public health. To be clear, we are NOT disputing that public health is the No 1 priority, but we do believe that governments need the flexibility to experiment with different options and to respond to other priorities.

That is the way forward.