Today, of course, is Sir John A. Macdonald Day.  In 2002, through an Act of Parliament, MPs and Senators chose to place each January 11 – the day on which Macdonald celebrated his birthday throughout his long life of public service – and also November 20, Sir Wilfrid Laurier Day, on the Canadian calendar.

I was a reporter then for the Kingston Whig-Standard and was able to secure a telephone interview with then-Prime Minister Jean Chretien to discuss the first-ever Sir John A. Macdonald Day.

Below this entry is a copy of that article.  But before going there, recall that January 11 is also Mr. Chretien’s birthday and it is also the birthday of the late, great Ontario Premier John Robarts.

So happy birthday to Prime Ministers Macdonald and Chretien, and to Premier Robarts as well.

As my friends know, for many years now I invite Prime Ministers – and U.S. Presidents! – to visit my home to plant ceremonial trees that my wife and I proudly plaque in our garden.  So far, seven Prime Ministers  — and also President Jimmy Carter! — have come by our place in Kingston to do their duty.  One of our favourite Right Honourable tree plantings, in fact, took place on Sir John A. Macdonald’s bicentennial day in 2015.

I knew in the fall of 2014 that former PM Kim Campbell, our first female PM, would be attending Kingston’s wonderful celebrations that day to mark the 200th birthday of our nation’s greatest Prime Minister, Macdonald of Kingston.  So, I bought the tree in October, planted it and on January 11, 2015 Madam Campbell poured, at the tree’s base, a ceremonial scoop of soil from the garden at Earnscliffe (the British High Commissioner’s residence) – the soil was kindly arranged by then-PM Stephen Harper and British High Commissioner Howard Drake.

So here is a picture of Prime Minister Campbell, along with Sir John A. himself, at the 19th Prime Minister’s historic tree planting in my garden that special day.

Oh, and while Prime Minister Justin Trudeau has twice told me he has agreed to perform his tree-planting here, Alison and I still await his arrival.  Over to you Prime Minister Trudeau!  🙂 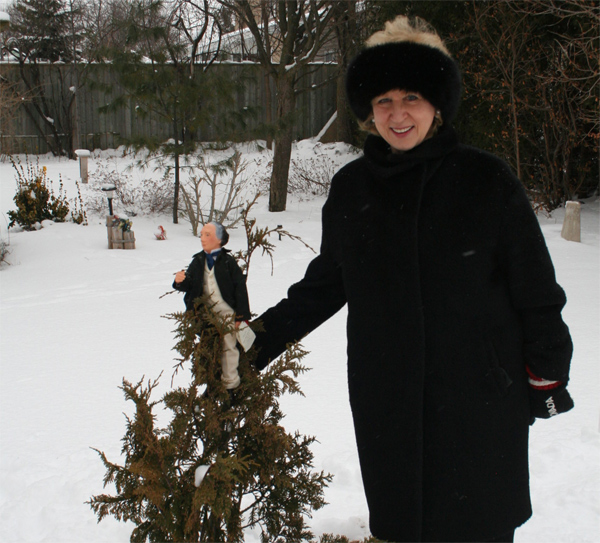 Former PM Kim Campbell was the featured guest at a tree-planting ceremony to mark the 200th birthday of Sir John A. Macdonald, at Arthur Milnes’ house, in Kingston.

He was a ‘masterful’ PM: On the occasion of the first official Sir John A. Macdonald Day, the prime minister speaks to The Whig’s Arthur Milnes about the man who shares his birthday and how to best honour him

Kingstonians are right to be proud of and continue to trumpet their connection to Canada’s first prime minister, Sir John A. Macdonald, says the man who now holds Canada’s top political job.

“The Member for Kingston is now [rightly] known as the father of Canada,” Prime Minister Jean Chretien told The Whig-Standard in an exclusive telephone interview this week from 24 Sussex Drive in Ottawa.

“I just want to say to the people who will be celebrating Sir John A. Macdonald that … it’s good that they celebrate a very colourful and masterful politician like him,” Chretien said. “He gave his life to politics and he had a good life. He had fun, too, in doing it … the Canadian way. [So] don’t take yourself too seriously.”

Jan. 11 is now officially Sir John A. Macdonald Day across Canada thanks to a private member’s bill passed by the Commons and Senate and granted royal assent last year.

Chretien, Canada’s 20th prime minister, has more than a passing interest in Macdonald.

In a unique historical twist, Chretien, a lifelong Liberal, was born on the same day as Macdonald.

When pundits and opponents began to suggest last year that Chretien was getting too old for the job of prime minister and had worn out his welcome after three consecutive majority victories, few mentioned that Macdonald was 76 when he won his sixth majority victory in 1891.

He discovered early on that he shared his birthday with Sir John A.

Chretien said Canadians will always owe Macdonald a fundamental debt. He was asked to describe what he considers Macdonald’s greatest single accomplishment.

“To unite Canada, the different colonies of [British] North America into what has become a great nation [and doing it] in partnership with [Quebec’s] George-Etienne Cartier, even if they were not my political party – my family were Laurier Liberals – but the forming of Canada was a success,” he replied.

The prime minister said our American neighbours and French allies have done a much grander job of honouring their past leaders than Canadians.

He pointed to the vast network of American presidential libraries – every former president from Franklin D. Roosevelt to George H.W. Bush have massive library-museums in place – and said the French allow their retiring leaders to create a museum in a subject area of personal interest.

France’s current president, Jacques Chirac, has a great interest in Aboriginal artwork and has spoken to Chretien about his future museum.

“His people are in touch with Canada because he has a very specific interest in [Aboriginal] art and he’s building a museum on that,” Chretien said.

This is in contrast to how Canadians treat their former prime ministers, Chretien said.

“We tend to be very modest in Canada compared to the Americans,” he said. “We’re a bit like the British I guess, who don’t do that much either … But in the United Kingdom, you know, they really boost Churchill quite a lot but the others come and go, like in Canada … Oh, we always read [in British history] about Gladstone, some are better known than the others but they don’t seem to devote as much memory of theirs as in the United States, for example, or France.”

Chretien admitted that it’s awkward for him, as the current prime minister, to raise the issue of official neglect of Canadian leaders. Still, he argued, the practice is well-entrenched.

“So it’d be difficult for [the sitting] prime minister to talk about it because [critics will] think that I want people to remember me,” Chretien said. “It’s not my preoccupation.”

Still, he said, he is bothered by the treatment afforded former prime ministers. There is no single museum Canadians can visit to learn about all their former leaders, collectively, Chretien pointed out.

Mackenzie King’s country residence, Kingsmere, located in the Gatineaus outside Ottawa, is also a national historic site, like Laurier House, and is open to the public.

The farmhouse at Kingsmere, where King died, is the official residence of the Speaker of the House of Commons, Kingston and the Islands MP Peter Milliken. It’s not open to the public.

Earnscliffe, Sir John A.’s Ottawa home and the place he died on June 6, 1891, also is off limits to Canadians. It has been the residence of the British High Commissioner to Canada since the 1930s.

Chretien, who pointed out that Bellevue House, one of Macdonald’s Kingston residences is a national historic site, said his government has taken small steps in honouring past Canadian prime ministers.

“We have done something lately,” he said. “For example, in the case of [Alexander] Mackenzie, the second prime minister, his [grave’s] monument was destroyed by vandals and nobody took care of it. So the Member of Parliament from that area [Sarnia’s Roger] Gallaway [told me about the grave’s poor condition] and said, ‘We have to do something.’ ”

Chretien said his government acted to ensure that from now on the final resting places of all deceased prime ministers are treated with proper respect.

“And now, every cemetery where there rests one of the prime ministers, we have a flag there and an inscription,” Chretien said.

Macdonald’s grave, at Kingston’s Cataraqui Cemetery, was refurbished and a historical plaque highlighting Macdonald’s accomplishments and a Canadian flag were installed in 1999 as part of Ottawa’s new policy for honouring deceased prime ministers.

The Kingston Historical Society hosts an annual graveside memorial for Macdonald each June 6, on the anniversary of his death. The last prime minister to personally visit the site and give an address was Brian Mulroney in 1991, the 100th anniversary of Macdonald’s death.

King visited the grave privately during a Kingston stop during an election campaign in the 1920s and told his famous diary that he hoped his own grave would look much like what he found at Cataraqui.

Arthur Meighen, who was prime minister twice at different periods in the 1920s, also visited the site in 1941 on the 50th anniversary of Macdonald’s death.

Both Diefenbaker and his rival, Lester B. Pearson, took part in Macdonald celebrations in Kingston during the turbulent 1960s.

The prime minister said he and his family will be marking his own birthday today quietly. Chretien said it still hasn’t been decided if he and Aline Chretien will stay at home at 24 Sussex Drive – with the PM himself doing the cooking – or whether they’ll go out to an Ottawa-area restaurant.

“It will be private,” he said, “very quiet … and, I will have a quiet dinner and I’ll go skiing … And on the weekend, we have no staff, so it’s going to be very quiet.”

His government, however, is asking Canadians to take time out today to honour Macdonald.

“The Right Honourable Sir John A. Macdonald was the first prime minister of Canada and one of the founders of Confederation,” Canadian Heritage Minister Sheila Copps said, in a written statement released this week. “As such, he played an important role in Canadian history. Sir John A. Macdonald Day gives us an opportunity to recognized his contribution to building our country.”

Chretien’s personal political hero, Laurier, also now has a day of honour entrenched on the Canadian calendar. Sir Wilfrid Laurier Day will be marked every Nov. 20.

Chretien has been interested in Canadian political history since his youth. He has served in Parliament with prime ministers Pearson, Diefenbaker, Trudeau, Clark, Turner, Mulroney and Campbell.

More than 50 years ago, a young Chretien met his first prime minister.

“I was 15 when [Louis St. Laurent] came [during] the campaign of ’49 in my riding,” Chretien recalled. “I made sure that I shook hands with him [because] at that time, my dad used to tell me that he had shaken hands with Laurier … [I made sure I was] next to the car and when St. Laurent came to get in his car he saw [me] waiting for him. He shook hands with me.”

Chretien said he couldn’t wait to get home that night and tell his father, Wellie Chretien, about his own encounter with a prime minister.