On this date in 1993, Prime Minister Brian Mulroney was in the midst of one of the most remarkable visits ever made to the U.S. by a sitting PM of Canada.

George H. W. Bush, who had been defeated by Bill Clinton in November of 1992, spent the last weekend of his Presidency at Camp David.  And in an unprecedented move, he invited a foreign leader, our own PM, to share the moment with him at the Presidential retreat in Maryland.

The Bush Sr.-Mulroney relationship remains the closest one to ever have developed between a Canadian Prime Minister and U.S. President.

“It was an extraordinary weekend and a high honour to have been invited, as a Canadian Prime Minister, to spend those two historic days with President Bush and his fabulous Barbara,” Mulroney later wrote in his Memoirs.

Many years later former Prime Minister Mulroney would deliver one of the eulogies at the State Funeral of President Bush.  Click here for CTV’s article in which they posted Mr. Mulroney’s moving tribute to his friend. 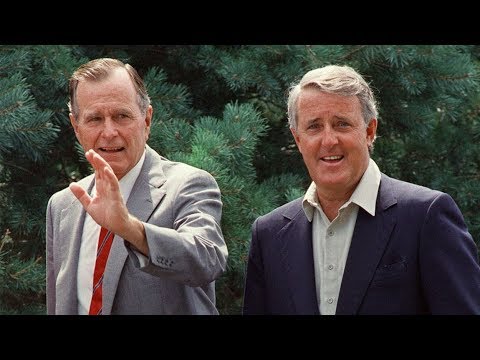