On This Day in Canada’s Political History: Appearing Before the Senate Former PM Pierre Trudeau Attacks Meech Lake Accord

It was on this date in 1988 that Pierre Trudeau, appearing before the Senate meeting in the committee-of-the-whole as a former Prime Minister, attacked the Meech Lake Accord in what is now a famous address. While many at the time and through to today are very critical of Mr. Trudeau’s role in scuttling the Meech Lake Accord (I today am one of them), one cannot deny it was a powerful and skillful appearance.

“I, for one,” the former Prime Minister said that day, “will be convinced that the Canada we know and love will be gone forever.  But, then, Thucydides wrote that Themistocles’ greatness lay in the fact that he realized Athens was not immortal.  I think we have to realize that Canada is not immortal; but, if it is going to go, let it go with a bang rather than a whimper.”

It is a quote that will follow Mr. Trudeau through history. 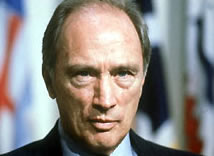