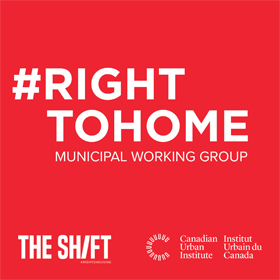 In cities across the country, we’ve witnessed the devastating effects of housing insecurity during the COVID-19 pandemic unfold on our streets and in our parks.  In the early days last March, shelters closed or cut their numbers, and many people were forced into doorways or tents.  Others lost their jobs and couldn’t pay rent, and – even with all the government supports available – fell into homelessness.

Many low-income people have managed to hold onto their housing but are paying even more of their monthly income for shelter than they were pre-pandemic; this leaves less money for other necessities like food, childcare, and transportation costs.  Indigenous people, Black people, and people of colour have been disproportionately impacted by housing insecurity, housing loss, and by COVID-19 cases and deaths, often as a direct result of living in inadequate or crowded housing.

Next week’s federal budget is an opportunity for the government to write Canada’s future story and uphold its human rights commitments.  We understand that there are many pressures on the public purse; we feel these every day locally, as we also have to make difficult choices.

But we can’t state strongly enough that unless Budget 2021 makes significant and immediate investments in housing that reach those in need, economic recovery will be slow and uneven. Cities across the country – which are the engines of innovation in an increasingly knowledge-based economy – will have to spend continued time, energy, and resources dealing with the issue of homelessness, rather than on broader recovery efforts, and residents will not benefit from a recovery plan if they do not have decent housing that is affordable to them.

By adopting a human rights-based approach to housing through the National Housing Strategy Act of 2019, the Federal government has committed to addressing homelessness on an urgent and priority basis.  The $1 billion federal Rapid Housing Initiative that rolled out in September 2020 was a good start.  This program will see the immediate creation of 4700 supportive housing units across the country, 1700 of which are due directly to the investment and contribution of provinces and cities.  With over 200,000 Canadians sleeping outside each night, and 27,000 chronically homeless who have lived on our streets for years, there is more to do.

A report by Carleton Professor Steve Pomeroy commissioned by the Canadian Alliance to End Homelessness shows that over the next 10 years, Canadian taxpayers will spend $70 billion to continue to manage homelessness.  Ending it would cost just $52 billion – a savings of $18 billion. The $52 billion plan would prevent an additional 300,000 Canadians from falling into homelessness, and it would create 500,000 well-paying jobs in the construction sector.  Not only does ending homelessness ensure compliance with the federal government’s human rights commitments, it makes good fiscal sense.

And, it’s the kind of bold, ambitious action that our cities and our most vulnerable residents require.  As a start, in Budget 2021 we’d like to see a $7 billion expansion of the Rapid Housing Initiative.  This will create at least 21,000 additional units of housing within a year for people facing homelessness.  If the federal funds are leveraged further with investment from provinces and land from cities, even more housing will be built.

We know that building new housing isn’t enough.  Between 2011 and 2016, the number of private rental units affordable to households earning less than $30,000 per year (rents below $750) declined by 322,600 units.  This trend is continuing as older rental stock is purchased by Real Estate Investment Trusts (REITs) that significantly drive up rent levels and drive out tenants.  The current National Housing Strategy proposes to build only 15,000 units per year over ten years. This means we’re currently losing far more affordable housing than we’re building.

Budget 2021 should create a significant fund for non-profit housing providers to acquire older market rental housing, renovate it as units turnover, and keep it affordable in perpetuity.  This will protect the seniors in our communities who live on fixed incomes, students who pay high tuition costs, women-led single-parent families, and people working in low-income jobs who can’t afford to pay market rents in any city in this country.  Budget 2021 should also include immediate rent relief measures for renters.

We are not alone in our call for a housing focus in Budget 2021.  A poll conducted by Nanos Research in August 2020 shows that 84% of Canadians support or somewhat support affordable housing investment as part of pandemic recovery economic stimulus.  And our residents in cities from coast to coast to coast call and email us every day asking us to do something about the housing crisis.

As cities, our roles and resources are limited.  But we’re here as partners nonetheless.  We pledge to work together with the federal, provincial, and territorial governments to create a future story for our country where every person has their right to housing met.  Doing so makes common sense, fiscal sense, and will help ensure a speedy, inclusive, and lasting recovery.

The authors are members of the Right to Home Municipal Working Group, which brings together elected officials and city staff from across Canada committed to securing the right to housing.  It is convened by The Shift and the Canadian Urban Institute.