It Shouldn’t be Expensive to Be Poor, Failure in Canadian Banks 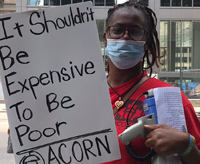 “We are in this together” said the political leaders across the world at the beginning of the pandemic, Canada was no exception. But we know that’s far from what transcribed in the months to come – not one, two but multiple times in multiple ways.

Canada’s big banks bragged about the numbers they posted while releasing their second quarter reports for 2021. Not only do the numbers run in billions of dollars, but the banks have seen their profits double and even quadruple! Average compensation of a Bank CEO stands at $11 million. In fact, four out of six Canadian banks in 2020 were among the top 50 most profitable banks in the world, even though they are much smaller, says Democracy Watch.

But do these obscene amounts mean anything in the lives of low-and-moderate income people, many employed as precarious workers who saw their work hours reduced or vanish or to people with disabilities or seniors who are barely surviving? Moreover, ACORN members from east to west, continued to face evictions as many provinces lifted the eviction moratorium as early as June of 2020!

But did any of this change the ways in which banks function? During the pandemic, banks got $750 billion as liquidity support from the federal government. But what we only heard was mortgage deferrals and deferred payments for credit products -most of which are credit products out of reach of low-and-many moderate-income people. In fact, low-and-moderate income people continue to suffer due to the NSF fees ($45-$48) which are at times so high that people take a payday loan with a 500% interest rate.  Why would the banks defer late mortgage payments not charging fees but continue to charge low-income people with NSF fees?

Toni Corrado, an ACORN member from East York was charged NSF fees four times by RBC when there was a delay in getting her pension cheque due to COVID. The total she was charged with came to $200! On top of it, as she says, “we are charged for taking out our own money”.

The hardship doesn’t end. Diane Devine, a London ACORN member on disability, was left with no income when BMO abruptly closed her account. Ultimately, after following up multiple times, she gave up on the bank.

No wonder then that people are forced to rely on predatory lenders that charge 60-500% interest rate depending on the size of the loan. Easy Financial, one of the biggest predatory lenders, showcases in its 2020 annual report that 78% of its customers were denied credit by a credit union or a bank.

BMO says, “We offer a range of competitive banking plans designed to fit the everyday needs of Canadians”. But none of these plans from any of the big banks is without a fee if you use your account. In fact, banks raised the fees last month and now require a minimum balance of $4,000 per month to avoid a fee for a decent plan! Where do we stand with the claims of a cashless economy when people can’t even access a basic bank account without a fee?

ACORN has championed the campaign for fair banking for years. From the day when our national leader Donna Borden contacted ACORN when she had paid thousands of dollars for a Citi Financial installment loan and yet was told thousands were remaining, to this day, the failure of the banks is a constant. The banks – RBC and BMO- are in fact financing these predatory lenders buying $53 million of  EasyFinancial’s debt as “convertible debentures” due on July 31, 2022.

That’s what brought hundreds of ACORN members across the country together to storm the big banks on our national day of action on fair banking. We are asking, “Do banks care?” If the top people of these banks are rated by the real people, the performance rating would result in no salary, let aside a bonus! We need the banks to stop charging fees, lower the NSF fees from $45 to $10 and offer low-cost credit products to people.

Will Justin Trudeau continue to side with big banks who had 100 full-time lobbyists with $500 million spending annually on their lobbying efforts or with millions of people who actually need access to fair banking?

Marva Burnett is the Chair of Scarborough ACORN and the National President of ACORN Canada. Marva is a child care worker, and a mother. She has been passionate leader with ACORN since it first started organizing in Scarborough in 2005 and has led countless campaigns over the years.

ACORN Canada is an independent national organization of low-and-moderate income families with 140,000+ members in 20+ neighbourhood chapters across 9 cities.