On This Day in Canada’s Political History: Remembering Flora MacDonald

Yesterday, July 26, I marked the anniversary of the first-ever Presidential visit to Canada. So today, I hope readers will forgive me for marking another historic moment that also took place yesterday – this time a sad one.  It was on July 26, in 2015, that a pioneering and distinguished Canadian female politician, Flora MacDonald, passed into history.  She represented my community of Kingston from 1972 until 1988 and helped pave a path forward for generations of female politicians.

Below is a tribute to her I wrote for the Kingston Whig-Standard at the time of her death.

With the passing yesterday of Flora MacDonald, Kingston’s MP from 1972 until 1988, Kingston and Canada have lost a true pioneer.

Of proud Scottish roots– just like her hero, Sir John A. Macdonald, also of Kingston –Ms. MacDonald blazed a path for Canadian women inside and outside of politics that our entire society continues to benefit from.

She went from the position of secretary–yes, that is what it was called back then in a different time and era Ms. MacDonald helped bury–of the Queen’s Department of Politics to service as the very first woman to become Canada’s foreign affairs minister—Secretary of State for External Relations as her position from 1979-1980 was then called.

It was Prime Minister Joe Clark, to his very great credit, who appointed the MP from Kingston to this crucial federal government position when he formed his government in June of 1979. In the almost totally male-dominated world of Canadian and world diplomacy, MacDonald’s star shined bright.

This was to become apparent to all when her role in helping in the successful escape to safety of six American hostages who had found refuge in Canada’s embassy in revolutionary Tehran became public in early 1980. She, along with Canada’s Ambassador to Iran, Ken Taylor, under the leadership Prime Minister Clark, worked in tandem with our American friends and allies to bring these American diplomats to safety.

Once their hostages were safely out of Iran, Americans reacted with grateful enthusiasm to the actions of MacDonald and the government and people she and Ambassador Taylor represented. In my lifetime at least, this was the high-water point in Canada-U. S. relations. And a Kingstonian was in the thick of it.

Decades after the events of 1979-1980 in Iran, Kingstonians, and members of the Queen’s community in particular, were able to see how grateful Americans remain to this day over MacDonald’s work. When the university honoured President Jimmy Carter and his wife Rosalynn Carter this special couple had only one request before coming to Kingston: that Flora MacDonald and Ken Taylor be part of their visit.

MacDonald sat proudly near the Carters at the head table at the luncheon at campus. I watched as President and Mrs. Carter both went out of their way to salute MacDonald and thank her, profusely, for what she had done for America during the Iranian hostage crisis of so long ago.

In a letter to me afterwards the Carters thanked Queen’s and Kingston for having MacDonald and Taylor on hand for their Hon. Degree events, calling them their own “special heroes.”

MacDonald also went on to serve with distinction in the cabinet of Prime Minister Brian Mulroney until her defeat in 1988. Afterwards she remained active in international affairs, visiting Afghanistan often and undertaking punishing tours– ones that would have exhausted a person half her age–there to help citizens of that war-torn country. She also advocated for the people of Afghanistan in countless speeches she made across Canada.

And right until the end she remained–and will continue to remain–an inspirational symbol for any young woman in Canada who wants to help improve her country through politics and public service. Hers is a legacy of which she and her family, and all Kingstonians, will be forever proud. 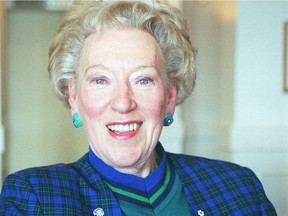