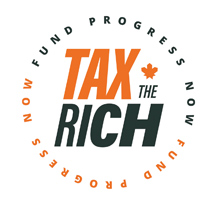 As if a sixth wave of Covid wasn’t enough, Canadians are being hit hard by a wave of inflation, from food and housing, to gas and the general cost of life.

Those with the most, however, will barely notice these rising costs, since a pandemic so hard for so many was also so good to a few.

As people in the middle now watch the value of their incomes evaporate, Canada’s richest smoothly sail on. Billionaires are making many billions more. Canada’s richest 1% of families now control a quarter of the country’s entire wealth.

As the government prepares to deliver Budget 2022, Canadians are budgeting for upcoming tax deadlines. But the government won’t tax all of us quite the same way.

While the average Canadian contributes a few months of income at tax time, Canada’s corporations have been making so much money that they can pay off their whole year’s taxes in a single week.

While most people have their taxes deducted at source, massive corporations can avoid paying hundreds of millions in tax by pretending the source of their money is simply offshore, in a tax haven.

Meanwhile, the Canada Revenue Agency ’s budget hasn’t increased in real terms, according to the Parliamentary Budget Officer, even though cracking down on rich tax dodgers could pay off to the tune of 3 billion dollars.

All Canada’s major parties have recognized the need for fairer taxes, but the solutions proposed so far fall short. A watered-down tax on luxury vehicles focuses on how the rich get around, while letting them get around our taxes. A proposed tax on excessive profits of banks and insurance companies is a good start, but lets other major corporate profiteers off the hook.

Other countries are ahead of us, like Spain, Switzerland, Norway and Argentina, which tax wealth itself, instead of making a wealth of excuses.

President Biden’s newly proposed minimum 20% tax on income and unrealized gains over $100 million US dollars is also a great example.

The new Liberal/NDP agreement has given millions of Canadians hope for programs that will address the rising cost of life, but these programs will require substantial revenue.

There’s $92 billion a year we could raise from fairer taxes. With a new spirit of cooperation on Parliament Hill, there’s no good reason to pass a budget that doesn’t tax the rich.