Canada’s 15th Prime Minister, the Right Honourable Pierre Trudeau, was in Washington on this date in 1971 for talks with President Richard Nixon at the White House.

“The President then gave an account of the Peking trip, emphasizing the point that it would not be at the expense of other countries,” an American report on the conversations between the two leaders reported. “The opening to the People’s Republic of China has helped with the Soviets, he pointed out. The Prime Minister remarked that when the President met the Soviets he would find an almost pathological fear of the Chinese. ‘Fear or hatred?’ the President asked. ‘Hatred,’ the Prime Minister replied.”

“The President explained that we had no illusions with respect to the China visit. A significant change in our own interests was unlikely. But because we both needed each other in certain areas this may be a masterstroke. Prime Minister Trudeau pointed out that the U.S. had to reassure its friends in Southeast Asia. The President replied that we knew the arithmetic.”

You can read more details about the Nixon-Trudeau meeting at the following link. 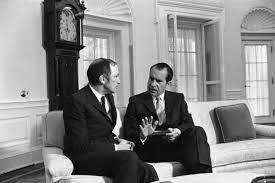