Salmon – One for All, All for One 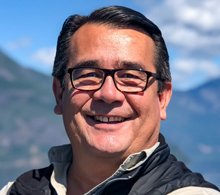 Salmon are anadromous, meaning that they hatch in the rivers, although they live most of their lives in the ocean – returning to their home rivers to spawn the next generation.  First Nations have harvested salmon runs since time immemorial – not to mention the bears and other wildlife that feast on salmon runs, distributing the benefit to the natural river and forest landscapes, both directly and indirectly.

British Columbia’s salmon farms have been a hot issue in indigenous politics ever since they arrived on our coast in the past three decades.   That’s because open-net farms corral high densities of invasive Atlantic salmon in unnaturally confined pens, creating plumes of effluent, sea lice and associated pathogens which freely permeate into the ocean water that is shared with wild Pacific salmon that migrate past the farms (as well as other ocean life).  This effluent is killing wild salmon and polluting their coastal habitat; and, wild salmon are fundamental to the culture and diet of every First Nation in the province – whether coastal or inland.

A handful of coastal First Nations that hold benefit agreements with the industry, rely on their right to make decisions about what happens in their territories, but ignore the fact that the cost of their decisions is borne by every Nation that goes without adequate salmon.

The Department of Fisheries and Oceans (DFO) has hidden for years behind a false narrative that industrial open-net pen salmon farming does not harm wild salmon.  Today, it’s trying to hide behind a narrative that somehow, open net pens can be managed in a way that will “reduce interactions” with wild salmon – while the sea lice, bacteria and viruses breeding on those farms are still released directly into wild salmon habitat.  This is the kind of magical thinking at DFO that led to the collapse of the east coast’s cod stocks.  BC’s First Nations will not stand by and watch DFO manage wild salmon out of existence.

This magical thinking includes reliance upon a fatally flawed Canadian Science Advisory Secretariat (CSAS) and 9 Science Risk Assessments that had Industry Influence in every step of this supposed objective scientific evaluation process.  Canadians deserve more than a federal department capitulating to an industry and looking to culprits for protection of Canada’s treasure, the iconic Pacific Salmon.

The First Nations Wild Salmon Alliance is determined to play a central role in rebuilding wild salmon populations.  We have identified over 100 Nations across the Province who call for and support the removal of open net cage fish farms from wild salmon migratory routes.  Some 90 % of BC First Nations rely on wild salmon for sustenance, cultural identity, social relationships and ceremony.  We support the many, many, consensus resolutions from the First Nations Leadership Council for urgent action to protect wild salmon.  And, we all recognize that one of the major threats to wild salmon survival that can be eliminated is industrial open-net pen salmon farming.

The sovereign right of every First Nation to decide what happens in its territory is, necessarily, subject to the collective rights of all indigenous peoples as confirmed in UNDRIP and ratified by Canada and British Columbia.  It follows that no First Nation has the right to conduct business in its territory that impairs the food security of others.  Those who insist on a “right to farm salmon” in their local coastal waters are wilfully ignoring the fact that wild salmon travel thousands of kilometres inland in their short life cycle – passing infected farms en route in the open ocean.

Wild salmon that once returned in the tens of millions to their natal streams, are now so reduced in number that some Nations have been forced to buy salmon to meet basic needs, never mind any thoughts about commercial opportunities.

This begs a call to action for Canada and BC to pay more than lip service to UNDRIP and keep their promise to transition salmon farms out of BC waters.  To this end, FNWSA has requested a meeting with PM Trudeau to discuss ways and means to achieve a viable and sustainable wild Pacific salmon fishery – both along the coast as well as in the interior.