National Newswatch is one of the most influential properties in its space on the internet in Canada.  Careful daily curation of content searched from the websites of over 400 publishers — and a growing list of expert contributors to our unique opinion and analysis section — has made National Newswatch the essential online destination for full coverage of politics in Ottawa and the provinces.

We’re reaching the most influential political and public policy professionals (including the Prime Minister) in the National Capital Region, leading the Hill Times to consistently name National Newswatch founder Will LeRoy one of Canada’s “Top 100 Most Influential People in Government and Politics in Ottawa.”  Beyond Ottawa, National Newswatch’s audience includes businesspeople, community leaders/activists, academics, and political watchers and enthusiasts in thousands of cities, towns and counties across Canada.  In 2019, we exceeded 1.25 million unique visitors for the year and the steady, daily traffic to our political hub generated an average of roughly 1.6 million pageviews per month.

Advertisements on National Newswatch can serve as a key and cost-effective component of any advocacy initiative, government relations/public affairs strategy or marketing/awareness-raising campaign.

Companies, associations and organizations use our site to:

Online, aka digital, advertising has two significant advantages over print:

These compelling factors explain why so much advertising has been shifting from print to online platforms.  (As the table below demonstrates, whereas TV once captured the lion’s share of the advertising market, digital advertising has moved into top spot for advertising spend). 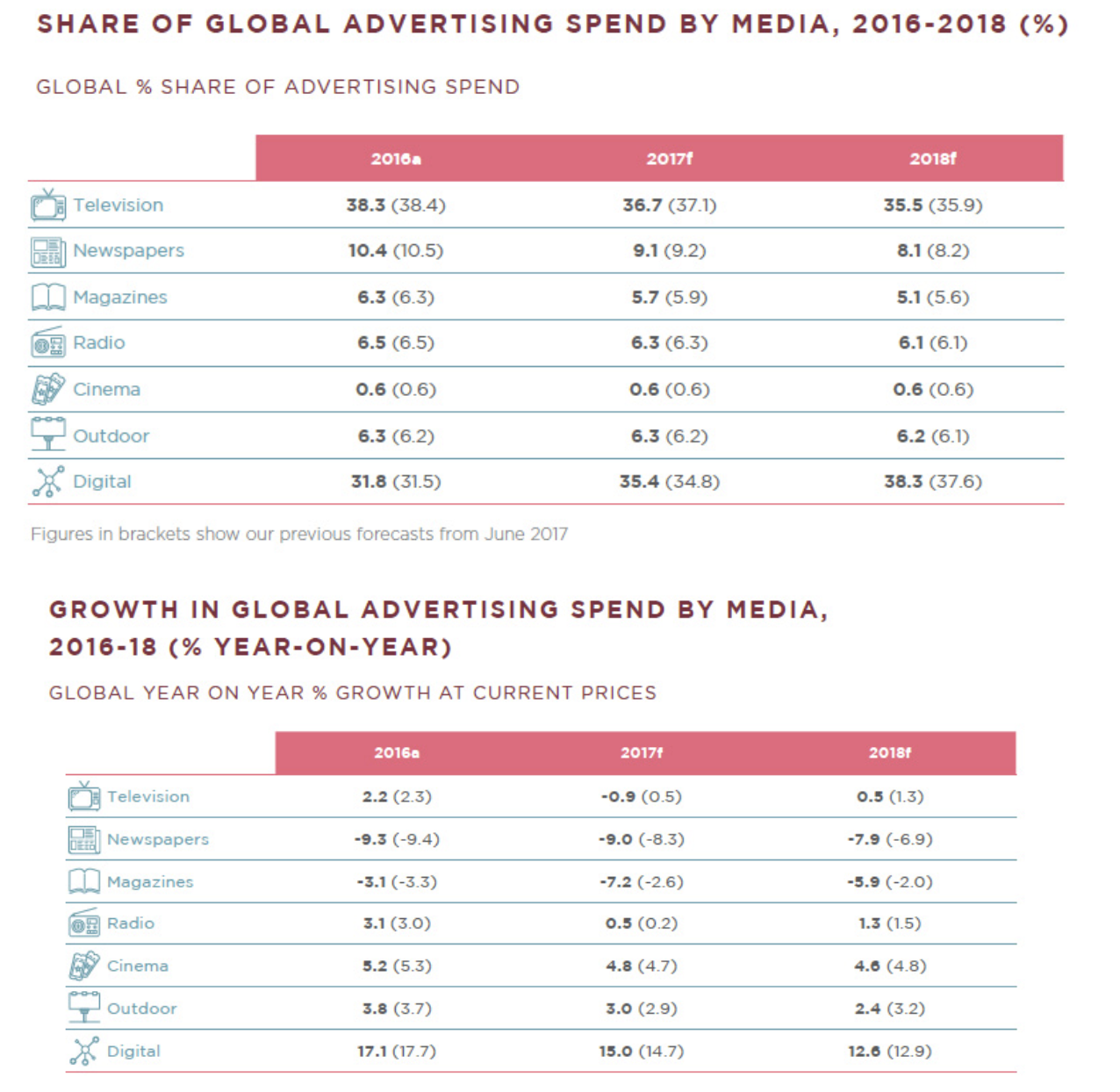 At National Newswatch, our ads are sold on a “Pay Per Impression” basis.  “Pay Per Impression” means that advertisers pay a fee each time their ad is displayed on our site.  (Most online ad services — including Google and Facebook — offer the same system.)  The most common approach to pricing for PPI ads, and the one that National Newswatch uses, is for a publisher to establish a flat fee for every thousand impressions.  This is known as a CPM, which stands for ‘cost per thousand impressions’ (where the ‘M’ represents the Latin numeral for 1,000).  An impression is only ‘counted’ by Google’s DoubleClick system (our adserver) when an ad loads on a page being viewed by a reader.

In the field of advertising, studies have repeatedly shown that repetition works.  Recognizing this, National Newswatch offers discounts for advertisers who opt for higher volume or longer term campaigns.

As just one example, a one month campaign delivering 500,000 impressions costs $4500.  However, advertising campaigns can be booked to suit any budget.  We would be happy to work with you to tailor something to your strategic needs (and your specific budget) but, to help get your thinking started, below are some sample packages, which incorporate discounts as the volume of impressions purchased increases:

Keeping in mind that repetition works, note that the year-long exposure to National Newswatch readers yields the lowest cost per impression.

Though the sample campaign periods listed above use months as a measure of time, the reality is that campaigns can be booked for any duration and that start/end dates are entirely subject to the needs of our clients.  (Note, however, that a minimum buy of $2,200 — i.e., 250,000 impressions @ $11 CPM — applies.)

Video advertisements that play before the content the user has selected (known as ‘pre-roll’ ads) can also be booked.  The CPM for pre-roll ads is $12.50.

Upon conclusion of an advertising campaign, National Newswatch provides a report to clients.

For advertising inquiries and/or to request a copy of the National Newswatch Media Kit, email James Anderson.