Ontario: Get ready for June 12 election 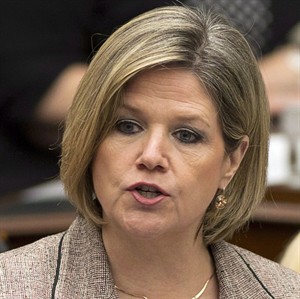 TORONTO - Ontario was plunged into a five-week election campaign Friday after Premier Kathleen Wynne decided it was better to pull the plug than wait for her minority Liberals to be defeated in the legislature on their brand new budget.

She visited Lt.-Gov. David Onley to ask him to call a June 12 election after the NDP dropped the bombshell that they would join the Progressive Conservatives to shoot down the $130.4-billion spending plan.

Ripping a page from the playbook of her new nemesis Prime Minister Stephen Harper, Wynne painted the decade-old Liberal government as the safe, steady alternative to the "reckless schemes" of the opposition parties.

Voters shouldn't consider veering to the political left or right, she warned, but stick to the balanced Liberal plan for job creation and economic growth that they proposed in Thursday's budget.

Tory Leader Tim Hudak and NDP Leader Andrea Horwath decided to force an election rather than supporting a plan that would see Ontario through its fragile economic recovery, she said.

It would also improve people's lives with a made-in-Ontario pension plan, billions for transit and transportation infrastructure and grants for businesses to create jobs, Wynne said.

"Quite frankly I thought there was a lot in the budget that would recommend itself to both the Tories and the NDP, but she made a different decision," she said. "I think a lot is at risk."

Although the NDP wrung concessions out of the Liberals in the last two budgets, Horwath said she could no longer prop up a government that was plagued by scandal after scandal and couldn't trust the Liberals to keep all their budget promises.

"I cannot in good conscience support a government that people don't trust anymore," said Horwath. "This budget is not a solid plan for the future. It's a mad dash to escape the scandals by promising the moon and the stars."

The controversies kept piling up, from the costly cancellation of two gas plants to the police investigation into the Ornge air ambulance service and potentially unsafe girders that were installed in the Windsor parkway, said Horwath.

"It's one scandal after another, it's continued behaviour from a government that hasn't seen the way to change their path, and so it wasn't only the $1.1-billion (gas plants) scandal itself, but it's the continuous cover up of information," she said.

"The leopard is not changing its spots."

Wynne put on a brave face when asked whether the scandals she's inherited from her predecessor Dalton McGuinty would finally end the Liberals' decade-long rule.

"I will continue to provide the openness that I have brought to this job since I came in just over a year ago," she said.

The dissolution of the legislature scuttles highly anticipated appearances of senior staff in McGuinty's office before a legislative committee looking into the gas plants scandal.

It also means there won't be any finding of contempt against the Liberals for the deletion of emails and wiping of hard drives in the premier's office because the committee is now disbanded.

The premier took several shots at Harper for failing to fund infrastructure to develop the Ring of Fire mineral deposit in northern Ontario, or help improve retirement income for people without a workplace pension plan.

But she reserved most of her vitriol for the NDP and the Tories.

"The NDP make pie-in-the-sky promises but they won't say how they'll pay for them," Wynne said. "So now is not the time for pipe dreams."

The Tories would "roll back the clock" in Ontario by "declaring war" on organized labour and slashing government programs people rely on, she added.

Hudak said he has no qualms about taking his ideas to voters, which include lower corporate taxes and an across-the-board public sector wage freeze.

Horwath is hypocritical for taking so long to defeat the Liberals, which they should have done at least a year ago, he said in Ottawa.

"If you're looking for who's going to be the best actor on the stage, if you're looking for someone who's running a popularity contest by promising funding on all kinds of projects but they don't have the cheques to cash in, well then vote for the Liberal leader or the NDP leader," he said.

"But if you want a turnaround plan to get Ontario working again, look at me, look at my team, look at my plan."

Several large labour groups, including the Unifor and the Ontario Federation of Labour, had urged the NDP to pass the budget and avoid an election, but public sector unions complained the fiscal plan puts jobs at risk.

The Ontario Public Service Employees Union — which has been in a tough labour fight with the Liberals — said they support Horwath's call to go to the polls.

Despite the left-leaning goodies in the budget like the pension plan, the Liberals can't be trusted, said OPSEU president Warren "Smokey" Thomas.

There needs to be an election, even if it runs the risk of producing a right-wing Conservative government that "hates unions" and will tear down the province's public services, he said.

Even though Wynne asked to have the legislature dissolved on Friday, and it won't sit again until after the election, the campaign period doesn't officially begin until next Wednesday.