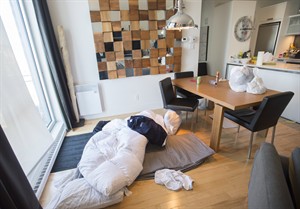 An apartment is shown in Montreal, Sunday, June 22, 2014, where three prison escapees were captured earlier Sunday. The three men escaped from a Quebec City-area prison by helicopter two weeks ago. THE CANADIAN PRESS/Graham Hughes

QUEBEC CITY, Que. - The return to court Monday of three accused drug traffickers who broke out of jail two weeks ago in a helicopter was punctuated by the jingle of shackles around their ankles.

Dressed in T-shirts and sporting beards, Yves Denis, 35, Denis Lefebvre, 53, and Serge Pomerleau, 49, appeared weary as they stood handcuffed in the prisoners' dock to hear new charges against them and learn relaxed detention conditions would be revoked.

The three men who were nabbed by a Quebec provincial police tactical team in a luxury Montreal condo early Sunday were arraigned on charges of escaping lawful custody and prison breach. They had been the subject of an international manhunt and an Interpol red alert.

During the resumption of their trial on drug charges, Quebec Superior Court Justice Louis Dionne also suspended his earlier ruling that eased the men's conditions behind bars before their brazen escape on June 7.

Among the changes are the removal of computer privileges for Pomerleau and permission allowing the men to circulate together in the prison yard.

Dionne informed the jury he had suspended his ruling changing the accused's conditions when they were called in.

Details of the arguments in court on the conditions cannot be reported because of a ban on the publication of details in the absence of the jury in the drug trial.

That trial, which started in April, resumed with testimony from an RCMP officer who presented expert testimony on the analysis of emails found on a cellular phone.

Crown prosecutor Antoine Piche acknowledged it was a bit unusual for the trial to continue in the absence of the accused while they were on the lam but not unprecedented.

"Nothing changed because we have our obligation to present our evidence the same way as we have to do it normally," he said outside the court after the proceeding. "We have to do it the same way when they are there or not. Our duty is still the same and we will do it until the end of the trial."

The men glanced occasionally around the courtroom during their appearance and sometimes shifted slightly, causing their shackles to rattle.

Conditions for the men had been eased before their escape despite the prison being aware that there was the possibility of a plot to break them out.

Acknowledgment of the existence of a possible jailbreak conspiracy is contained in Dionne's judgment dated March 24 and made public recently.

Dionne had been asked to rule on the strict security conditions which the inmates argued prevented them from helping in their defence on charges of murder and gangsterism.

In his ruling, which was recently made public, Dionne gave the detainees access to a secured computer for their trial preparation. The ruling also stated they didn't have to wear handcuffs during proceedings and would be allowed to go into the prison yard on weekday evenings, prison staffing permitting.

The trio will return to court on Thursday.

They also face murder charges in Montreal and that trial is expected to start in 2015.

The men were brought to court earlier in the morning in three separate convoys. Each man was in a different prison van, which raced through the streets from the suburban Orsainville detention centre to an enclosed courthouse garage.

Journalists and members of the public who wanted to attend the proceeding had to pass through airport-style security to get into the courtroom. They were searched and had to show identification.

Pomerleau, Denis and Lefebrvre were the subject of an Interpol red alert since their escape two weeks ago.

A heavily armed tactical squad busted open the door of the condo around 1:30 a.m. The men did not resist.

Quebec provincial police were seen carrying several containers from the condo after searching it. A car was seized and police said Monday they also found $100,000 in cash in the residence.

Provincial Police Lt. Michel Brunet said in an interview that "we can assume that the money would probably be used to get outside the country," but added it could also be used for clothing, food "and all that." He pointed out that no weapons were found at the scene.

The Quebec government has ordered an internal investigation into the jailbreak, which is the second using a helicopter in just over a year.

Two inmates fled the St-Jerome detention centre by helicopter in March 2013, but were quickly recaptured.