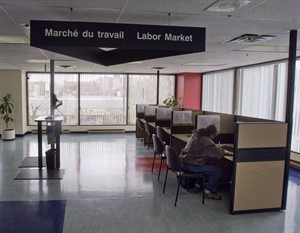 A man looks through jobs at a Resource Canada offices in Montreal April 9, 2009. THE CANADIAN PRESS/Ryan Remiorz

OTTAWA - Finance Minister Joe Oliver is rejecting a recommendation from a report issued by the C.D. Howe Institute that he focus more on creating jobs than eliminating a tiny deficit.

The report by McMaster University economics professor William Scarth argues that keeping the deficit at 0.5 per cent of GDP for the next three years could lower the unemployment rate by 0.4 per cent, or create the equivalent of 75,000 additional jobs.

The recent slowdown in economic growth and job creation has put the government under increased pressure to become more active on stimulating growth. Earlier this month, the Ontario government announced a budget that would spend more on infrastructure while running a $12.5-billion deficit.

In a statement, Oliver said job creation can be accomplished without creating deficits during times of economic recovery.

"Our government will not open the taps on reckless spending. We will not go down that well-trod and irresponsible path to economic decline," he said.

But NDP finance critic Nathan Cullen said the minister is ignoring evidence the economy is headed in the wrong direction. In the past year, Canada has created only 72,000 jobs, all of them in Alberta.

"Balancing the budget is a political imperative not an economic one," he said. "It's like balancing the family budget and not feeding the kids."

In a commentary earlier in the week, Liberal deputy leader Ralph Goodale said the Harper government was in "denial" about the jobs picture in Canada all so it "can concoct a surplus on the eve of an election."

Eliminating the deficit in 2015 is critical for the federal Conservatives heading into a fall election that year because, in 2011, Harper promised to cut personal taxes by about $2.5 billion through a form of income splitting once the budget was balanced.

The report argues that maintaining a deficit in the $10 billion range, where most believe it currently stands, would pose no economic or fiscal problems for Ottawa, which already has by far the lowest debt-to-GDP ratio among the G7 countries.

Longer term, it would mean missing the stated 2021 target of reducing the national debt-to-GDP to 25 per cent by only a single percentage point.

"A government that emphasizes its commitment to protect the interests of working Canadians should not reject this opportunity to lower unemployment when it can be achieved without a serious trade-off," Scarth states.

The recommendation that Ottawa should delay its efforts to balance the budget and spend on infrastructure to create jobs has been advocated by left-wing economists, but Scarth's report is not so easily pigeon-holed.

Scarth is critical of the Ontario Liberal's recent budget given the province's burdensome debt and on efficiency grounds.

The paper argues that sub-national governments like provinces don't have the same ability to stimulate the economy through spending, partly because of spillage to other provinces and partly because their actions don't directly impact the country's trade.

C.D. Howe economist Finn Poschmann says that is why stimulus spending in countries like Greece, which have no control over the value of the euro, tend not to work, or not work optimally.

Former Bank of Canada governor David Dodge also recently came out in favour of increased spending on infrastructure, particularly at this point in the business cycle when borrowing costs are at historically low levels.

"It is thus important to realize that in the current environment of low long-term interest rates, fiscal prudence does not require bringing the annual budget balance to zero almost immediately," he wrote in a paper for the Bennett Jones law firm.

The report estimates a 1.5 per cent multiplier effect from carrying a $10-billion deficit — in essence spending $10 billion more than planned so that the economy will enlarge by about $15 billion.

Bank of Montreal chief economist Doug Porter says he might not advise a new round of stimulus spending as long as the economy is "plodding" along, but it also would not concern him.

"The market is not crying out for a tighter fiscal policy at the federal level," he explained. "If the government wheeled out a significant medium-term infrastructure program, I don't think I'd have a big problem with it — they can borrow very cheaply and there's a pretty good case to be made that there's lots of demand for infrastructure."

Scarth's paper argues that while infrastructure spending would help the economy, it is important that it come from Ottawa rather than Queen's Park or other provincial capitals. It would be more effective and Ottawa, with its low debt-to-GDP ratio, can afford it, he said.