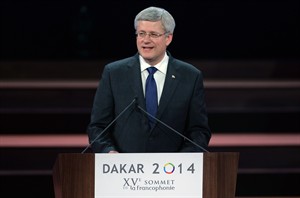 Prime Minister Stephen Harper delivers a speech at the opening ceremonies of the Francophonie Summit in Dakar, Senegal, on Saturday, November 29, 2014. THE CANADIAN PRESS/Sean Kilpatrick

DAKAR, Senegal - Prime Minister Stephen Harper has urged countries in la Francophonie to do all they can to put an end to child marriages as well as forced unions.

Harper told the opening ceremony of the summit of French-speaking nations in Senegal on Saturday that 100 million females were forced into marriage between 2004 and 2014 before reaching adulthood.

"When girls cannot achieve their full potential, everyone suffers: the girls, their children, their communities and their countries," he said.

Harper described family as the foundation of society, adding it cannot thrive if it is based on constraint and inequality.

The main theme at the 15th summit of French-speaking nations is women and youth.

Harper announced Friday that Canada would contribute $500 million to a program aimed at providing vaccines for impoverished children around the world.

He noted Saturday that delegates at the summit will vote on a Canadian resolution on the health of mothers, newborns and children.

"Every year, hundreds of thousands of women do not survive pregnancy or childbirth," said Harper, who is at the summit alongside two premiers — Quebec's Philippe Couillard and New Brunswick's Brian Gallant.

"In 2013, more than six million children died before their fifth birthday."

Harper said a Canadian-led initiative from the G-8 summit in 2010 has reduced maternal mortality and improved the health of mothers and children in the poorest countries in the world.

"Between 2010 and 2013 — in just three years — two million deaths were prevented because children had access to basic vaccines.

"I firmly believe that it is possible to put an end to preventable maternal and child deaths within a generation."

The summit ends Sunday, the day a new secretary general of la Francophonie will be elected to succeed the outgoing Abdou Diouf.

Former governor general Michaelle Jean is one of five candidates in the race.

While Jean has the support of the federal government, Quebec, New Brunswick and her native Haiti, it remains to be seen how many other members of la Francophonie will endorse her.

The organization has 57 members or associate members, while another 20 jurisdictions have observer status.