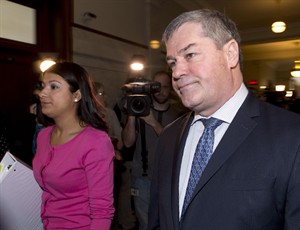 Quebec Education Minister Yves Bolduc, right, is under the spotlight as he walks out of a government caucus meeting, with press attache Yasmine Abdelfadel, Wednesday, February 25, 2015 at the legislature in Quebec City. Ongoing rumours of a Cabinet shuffle are in the air. THE CANADIAN PRESS/Jacques Boissinot

Bolduc told reporters he has also resigned his Quebec City-area seat in the provincial legislature in addition to quitting cabinet.

The abrupt departure comes following a number of controversies surrounding Bolduc, including a recent one over strip searches at Quebec schools.

Premier Philippe Couillard stood with Bolduc as he made the announcement in Quebec City, following a brief meeting with the Liberal caucus and Couillard himself.

"I took a personal decision to return to practising medicine," Bolduc told reporters without taking any questions.

"It's a decision that was my own and given all that's going on ... I took the decision to return to practising medicine which I love."

Bolduc has been a source of embarrassment for the governing Liberals in recent days after comments he made about strip searches at schools.

Last week, Bolduc said strip searches were permitted in Quebec high schools as long as they were conducted in a manner that was ``very respectful'' to the student.

The issue surfaced after a 15-year-old girl told the Journal de Quebec she felt violated after being strip-searched because the school suspected her of selling drugs.

One day later, Bolduc backtracked and announced an independent lawyer would look into the allegations.

Earlier this week, Couillard refused on a number of occasions to give Bolduc a vote of confidence, fuelling rumours of an impending cabinet shuffle.

On Thursday, an emotional Couillard paid tribute to Bolduc, the man who replaced him in 2008 as health minister.

"I've received Yves' decision with sadness," Couillard told journalists, thanking Bolduc for his service. "I want to thank him for his passion, his dedication ... it's not a perfectly happy day today, but there will be happier days in the future."

Bolduc will receive a $152,000 transition allowance and Couillard announced he will shuffle his cabinet on Friday.

While the successor to Bolduc remains unknown, Culture Minister Helene David and Employment Minister Francois Blais appear to be in the mix.

Bolduc, who turns 58 next week, is a doctor and served as the province's health minister between 2008 and 2012 and inherited the education portfolio when the Liberals swept to power last year.

He has had a difficult run since being named to Couillard's first cabinet.

In June, Bolduc was the centre of controversy over a $215,000 bonus he received for taking on new patients while the Liberals were out of power and he was practising medicine while in opposition.

Those new patients were dropped after the Liberals won the election last April.

Also last August, Bolduc found himself in controversy again after saying that no child would die or stop reading because of fewer books in school libraries.

The comments were in reference to budget cuts for schools in the upcoming school year.