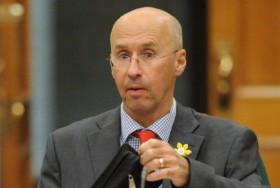 Canada’s first Parliamentary Budget Officer says Canada should run a deficit over the next few years in response to the country’s stagnant economy.

Kevin Page, the former Parliamentary budget officer and Jean-Luc Pepin research chair at the University of Ottawa, said Tuesday that when the economy is in trouble, it’s better to be in deficit than balancing the books on the backs of struggling Canadians.

The Liberal Party is the only party suggesting deficit spending as Statistics Canada announced Tuesday that the country is in a technical recession.

Real GDP fell 0.1 per cent in the second quarter, following a 0.2 per cent decrease in the first quarter, according to the Statistics Canada report.

The Conservatives’ own balanced budget legislation defines a recession as a period of at least two consecutive quarters of negative growth in real gross domestic product for Canada, as reported by Statistics Canada.

“The reality is we are in deficit right now. Stephen Harper won’t admit it, the same way he won’t admit that we’re in a recession, ” Scott Brison, Liberal candidate for Kings-Hants, N.S told Evan Solomon.

“Justin Trudeau is simply leveling with Canadians and saying that the Harper government is in deficit now, and any new government is going to inherit that deficit,” said Brison.

Trudeau announced last week that his party, if elected, would run three straight years of deficits of less than $10 billion a year before balancing the books in the 2019-2020 fiscal year.

He said investment, like the kind of stimulus spending the Conservative government introduced in 2009 with their $35-billion spending package, is what Canada’s economy needs now.

“We’ve had so little investment from the private sector over the past few years and very little public sector investment. I think we do need this investment,” Page said.

But unlike during the 2009 recession, the Conservative government is not proposing a stimulus plan. Instead, Stephen Harper said the current economic figures are good news.

“Thank God we didn’t use a couple of months’ weak data to go out and commit this country to three years of deficit spending and huge tax increases like the other guys would have done,” Harper said at a campaign stop in Burlington, Ont. Tuesday.

“How can it be good news that we’ve had two consecutive quarters of declining growth; that our goods sector—which includes manufacturing, construction, mining and agriculture—is in a serious recession, declining almost three per cent on a year-over-year basis? It’s not good news,” said Page.

But the Conservatives are taking a stay-the-course approach to the economy this time around.

“Our plan has been a multi-year plan,” Erin O’Toole, Conservative candidate for Durham, Ont., said on Solomon’s radio show Tuesday.

He said during the 2009 recession Canada followed the path of the other G20 nations.

“When banks were failing and the global economy, the G20, was in recession and everyone was providing a stimulus that’s when Canada, alongside others, provided the stimulus,” O’Toole said.

Tom Mulcair’s NDP took the surprise move of committing to a balanced budget next year.

“This year we’re under Stephen Harper’s budget, but next year we will bring in a budget that will make different choices,” Peggy Nash, NDP candidate for Parkdale-High Park, Ont., told Solomon on Tuesday’s show.

“And what we will not do is what the Liberals and the Conservatives have promised, which is to let companies, big corporations, off the hook,” she said.

The NDP promises to raise the corporate tax rate but hasn’t unveiled its platform to outline how it will balance the books.

Even with the economy and the r-word dominating the election discussion Tuesday, Page said the economy isn’t going to be the main question voters will have on their minds come E-day.

He says trust will be top of mind on October 19: “As a former Parliamentary budget officer, I worry about the lack of trust in institutions,” Page said.

Canadians are doubting the integrity of the Senate; they are questioning the ability of the public service to be transparent, and Mike Duffy’s fraud, bribery and breach of trust trial has cast shadowy doubts over the entire PMO apparatus, Page said.

“So yeah we need to talk about jobs, we also need to make sure we have the institutions in place to deal with these big issues,” Page said, citing infrastructure, healthcare and pensions as some of the major concerns facing Canadians.

Political journalist Yael Berger is a producer at Everything is Political Campaign 2015 with Evan Solomon, a daily radio show and podcast covering the 2015 federal election.  She has been working in digital media in Ottawa for five years.