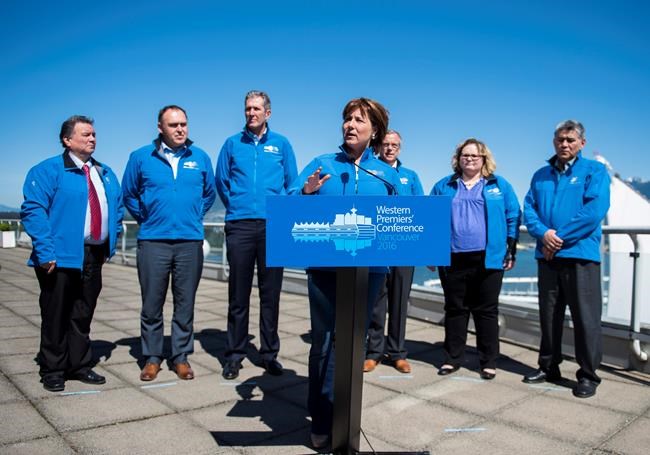 British Columbia Premier Christy Clark wrapped a two-day summit in Vancouver on Friday by emphasizing their concerns that the wildfire has charred the integral oil sector.

"As Fort McMurray burns, and as the economic infrastructure that has so long supported Canadians is threatened, international observers are suggesting that our economic growth is going to suffer disastrously," said Clark, surrounded by her counterparts.

"I think that puts the finest point possible on why Western premiers are so focused on making sure that we have investment in our resource economy," she said, referencing a report from the Bank of Montreal.

BMO's chief economist released a report on Friday citing "the horrible news of the wildfires in Fort McMurray." Douglas Porter wrote that the bank is adjusting its forecast for Canada's growth rate from 1.5 per cent to zero for the second quarter.

He referenced the fires that burned through Slave Lake, Alta., in May 2011, when the energy sector GDP fell by 3.6 per cent.

"Based on what we do know at this point about the production curtailments ... we have cut our (second quarter) GDP estimate to zero," he wrote.

Instead, officials' top priorities are getting the fire under control, ensuring the safety of citizens and protecting a hospital and government buildings, she said.

"As every member of our government continues to rebuild Fort McMurray, we're also working to diversify our economy," she said.

"We can't control the international price of oil, but we can do something as Canadians to try to get to the most markets."

Hoffman expects their government will begin to assess the economic impact in the days ahead.

She also thanked provinces for offering "unique supports you don't plan for," such as by sending psychologists to Alberta to treat firefighters who may suffer trauma on the front lines.

Later in the day, Clark tweeted that B.C. will donate $300,000 to Red Cross Canada for fire relief.

Nick Lupick, an oilsands analyst for AltaCorp Capital, told The Canadian Press no physical damage has been done so far to any projects.

But he estimated production has dropped between 1.1 million and 1.25 million barrels of oil per day, as workers have fled their homes and can't keep up operations.

While the fires were top of mind as the leaders gathered, said Clark, they worked through a series of substantive topics to find common ground.

The group will press the federal government to launch discussions about promised changes to the health-care funding formula, she said.

She reiterated the provinces want Ottawa to return as a full partner, especially as the population ages — a message first delivered by provincial health ministers in January.

They will ask the federal government to lift caps on the provincial nominee program, allowing provinces to bring in more skilled immigrants. They also want Ottawa to address changes in employment insurance that have impacted people in some parts of Alberta and Saskatchewan.

The leaders will meet again next in Yukon in July.