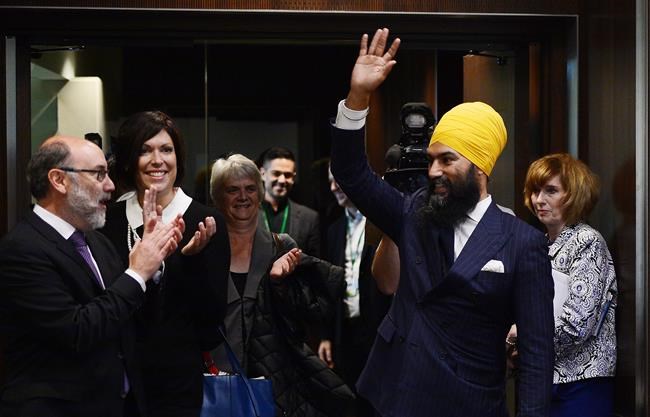 Singh, whose high-profile status as a practising Sikh has some observers predicting he'll get a rough ride in Quebec due to its long-standing position on secularism, said Caron will be a thoughtful and qualified parliamentary leader who helps signal that Quebec is important.

Singh, a member of the Ontario legislature who won the party leadership on Sunday, has no Commons seat.

"We are not just going to hold on to (16) Quebec seats," he said while MPs cheered behind him.

The NDP can make inroads in the province due to its unique offer, Singh added, referring to the party's Sherbrooke Declaration — a policy affirming the province's right to self-determination through a simple majority vote.

Caron said Singh's decision to declare his support for the policy during the campaign was well-received, adding this will allow for them to work together.

Pollster Frank Graves, president of Ekos research, said it is clear the NDP is currently struggling in Quebec. The province's support in 2011 helped boost the NDP to historic electoral success and become the Official Opposition.

"This leader, who may light it up in other parts, it remains to be seen whether he's going really be the ticket to redemption in Quebec," Graves said in an interview.

Singh said the other leadership candidates, Niki Ashton, Charlie Angus and Peter Julian — who dropped out of the race early — will have an important place on his team.

He has yet to announce changes to critic portfolios since becoming leader.

Neither outgoing leader Tom Mulcair nor Angus, who finished the leadership race a distant second to Singh, were at the NDP's weekly caucus meeting.

Mulcair is travelling and Angus said he is spending time in his northern Ontario riding.

Angus said he is pleased to see Caron named the leader in the House.

"Guy's a fantastic guy so I'm really glad that he's got a good position with the new leader," Angus said.

Angus said he looks forward to hearing Singh's vision for Quebec and the rest of the country.

"We've been out in the wilderness for too long," he said in an interview.

"We need to learn lessons about why we lost (in 2015). I really hope, in the lead up to 2019, the lessons of that time in the political wilderness, we will have learned them."