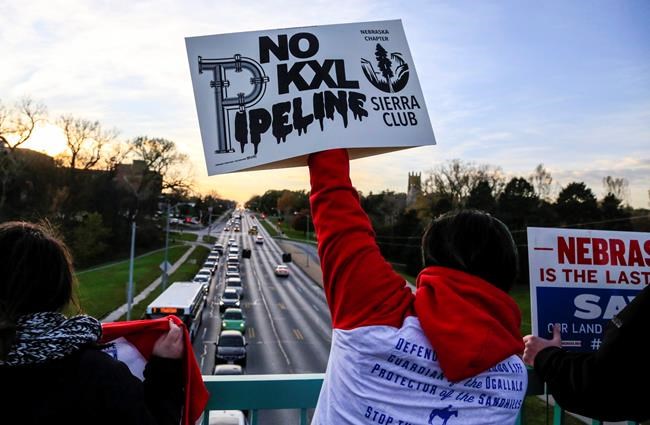 The milestone comes after close to a decade of development on the project that Barack Obama rejected after years of review in 2015, only to have President Donald Trump issue the presidential permit in March, saying the pipeline will bring jobs and reduce dependence on foreign oil.

The federal reversal left only Nebraska as a holdout, where landowners had challenged TransCanada's land access strategy and pressured the company to go through the state's Public Service Commission for route approval.

The commission decided in a 3-2 vote to allow the pipeline but not along TransCanada's preferred route, instead shifting the southern portion of the Nebraska route toward an existing TransCanada pipeline and away from sensitive ecological areas.

The panel said in a written decision that the alternative route was only eight kilometres longer than the preferred route, in the public interest, and that TransCanada had told the commission it was still a viable and beneficial route.

TransCanada's (TSX:TRP) CEO Russ Girling said in a statement that the company was evaluating the decision.

"We will conduct a careful review of the Public Service Commission's ruling while assessing how the decision would impact the cost and schedule of the project."

Commissioner Crystal Rhoades, who voted against the project, said the alternative route still did not do enough to address her concerns, arguing the company should be forced to use even more of the existing Keystone pipeline corridor by adding about 84 kilometres to the route.

"The applicant did not refute the landowners' argument that using the existing Keystone I would avoid fragile soils, reduce impacts to endangered species, and avoid widespread controversy and opposition to this project."

Environmentalists, landowners, First Nations, and others opposed to the project cheered the extra hurdle posed by the alternative route, while vowing to continue fighting the project in the courts and on the land.

"Despite conditional approval for an alternative route for Keystone XL, this pipeline will never be built. There's too much at stake to allow this dirty, dangerous project to move forward," said Todd Paglia, Executive Director of Stand.earth.

Representatives of the 150 First Nations that have signed on to the Treaty Alliance Against Tar Sands Expansion said the fight was on to block the project.

"The Treaty Alliance of Tribes up and down the Keystone XL pipeline route will be standing strong along with all our other allies to beat back this threat to our water, our people and our future," said chairman Larry Wright Jr. of the Ponca Tribe of Nebraska.

Despite the opposition, the decision gives more certainty to the 1,900-kilometre pipeline that TransCanada has been working to develop for nearly a decade, said Wood Mackenzie analyst Zachary Rogers.

"The decision by Nebraska essentially diminishes the political risk in the equation, and longer-term, should this pipeline get built, it will be the Western Canadian producers who will likely emerge the big winners."

He said it's hard to say what exactly the impact may be of the alternative route, but that it doesn't seem likely to be a game-changer for the project.

Going ahead with the project would, however, negatively affect TransCanada's business risk profile and likely put pressure on its financial metrics, said Gavin MacFarlane, a vice president at Moody's Investors Services.

"While today's Keystone XL pipeline approval is an important milestone, it does not provide certainty that the project will ultimately be built and begin operating," stated MacFarlane.

"What we still need to do, is to get that pipeline to the west coast constructed," said Notley at the Toronto stop of her Trans Mountain pipeline advocacy tour.

The Nebraska vote came as TransCanada continued to clean up a 5,000-barrel oil spill from its pipeline in nearby South Dakota that opponents have held up as a reason not to approve Keystone XL.

The commission, however, was prohibited from evaluating safety considerations, including risk or impact of a spill, and ruled instead on issues including regulatory compliance, economic and social impacts of the project, the potential intrusion on natural resources, and whether better routes exist.