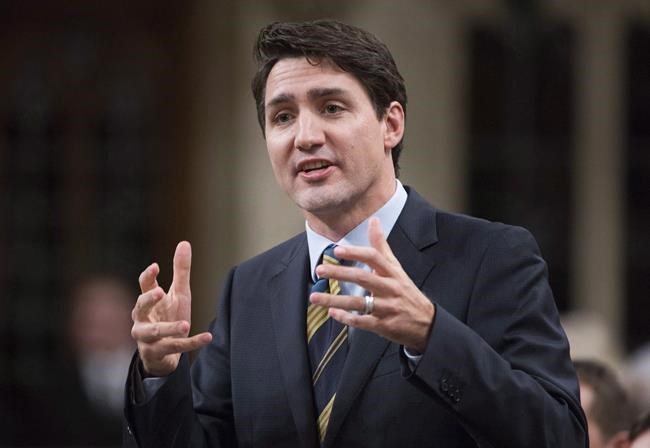 OTTAWA — As Prime Minister Justin Trudeau prepares to travel to China next week, officials say Canada is still contemplating the challenges associated with pursuing a free trade deal between the two countries.

The prime minister leaves Saturday for his four-day trip — a return visit that at least one analyst says is shaping up to be a very "ordinary" excursion.

"There are a number of considerations still to be had. The government is weighing the challenges and opportunities," a government official who briefed journalists on Friday said when asked about the possibility of Trudeau launching trade talks in Beijing.

The officials, speaking on condition of anonymity in accordance with the terms of Friday's briefing, say the focus of the trip will be deepening economic ties and attracting more Chinese investment to Canada.

Trudeau will meet Monday with Chinese President Xi Jinping and will also have meetings with senior Canadian and Chinese executives.

The government recently released the results of consultations with more than 600 businesses, academics and civil society groups.

Some of those surveyed said a pact with China could kill Canadian jobs, including in manufacturing, and reduce the ability to compete against lax labour standards, lower environmental requirements and Chinese state subsidies.

"The trip has to be understood as an ordinary trip in extraordinary times," said Paul Evans of the Institute of Asian Research at the University of British Columbia.

But the visit is essential, he added, because Trudeau committed to yearly leaders' meetings when he decided to ramp up relations with China.

Evans said Canada is likely biding its time amid the ongoing renegotiation of the North American Free Trade Agreement, which reached an impasse earlier this fall when the United States tabled a series of proposals that Canada and Mexico deemed untenable.

"Canada will try and tread water for a little time longer," while the Chinese will be "increasingly frustrated on this," Evans said. But the visit is essential, he added, because Trudeau committed to yearly leaders' meetings when he decided to ramp up relations with China.

He is scheduled to move on to the city of Guangzhou where he'll give the keynote speech at a global business conference and meet with various business leaders about trade and investment.

Environment Minister Catherine McKenna will accompany Trudeau only to Beijing, where she will be promoting clean energy co-operation with her Chinese counterparts.

In announcing the trip earlier this week, Trudeau's office made no mention of free trade, and government officials have said no decision has been made on whether to pursue such negotiations.

"A strong relationship with China is essential to creating jobs, strengthening the middle class, and growing the Canadian economy," Trudeau said in statement.

"I look forward to meeting again with China's leaders to strengthen our relationship and set the stage for even greater trade and investment co-operation."

A coalition of Canadian human rights groups led by Amnesty International wants Trudeau to raise the cases of 16 political prisoners when he meets with Chinese leaders.

Note to readers: This is a corrected story. An earlier version misidentified Chinese President Xi Jinping.