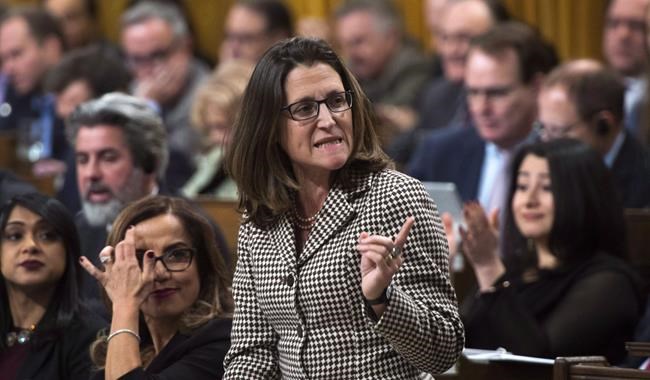 OTTAWA — Several days of deadly protests in Iran are not deterring the Trudeau government from its efforts to restore diplomatic ties with Tehran — at least for now.

A spokesman for Foreign Affairs Minister Chrystia Freeland indicated Tuesday that Canada is not contemplating ending talks with Iran, despite being "deeply troubled" by the deaths of at least 21 protesters and the arrests of hundreds more.

"Canada will continue to engage with Iran on terms that we set, as it remains an effective tool to hold Iran to account, promote human rights and advance our consular interests," Adam Austen said in a statement.

Debate over Prime Minister Justin Trudeau's campaign promise to restore diplomatic relations has been rekindled during six days of protest across Iran that have been described as the most significant challenge to the country's ruling regime in nearly a decade.

The unrest began Thursday when demonstrators gathered to express anger at unpaid wages and rocketing inflation before spreading into expressions of dissatisfaction with the current government.

"Canada is deeply troubled by the deaths of protesters in Iran," he said. "We call on the Iranian authorities to uphold and respect democratic and human rights."

Austen lauded Iranians "who are bravely exercising their basic right to protest peacefully" and said Canada will continue to support their fundamental rights, "including freedom of expression." He added that the government will continue to monitor the protests closely and speak out about the treatment of protesters.

Austen also reiterated Canada's opposition to Iran's support for terrorist organizations, its threats toward Israel, its ballistic missile program and its support for the repressive regime of Bashar Assad in Syria.

Nevertheless, he said the government believes "open and frank dialogue" is the way to hold Iran to account on human rights and to advance Canadian consular cases.

Stephen Harper's Conservatives cut ties with Iran in 2012. The Liberals pledged during the 2015 federal election to restore relations with Iran, and Global Affairs officials have since held several rounds of quiet discussions with Iranian counterparts.

A senior official from Iran's foreign ministry told the state-run Mehr News Agency on Dec. 18 that the two sides had recently wrapped up a fifth round of talks, and that another had been planned for early in 2018.

"We are planning to deploy an Iranian delegation at the directorate-general level to Canada following the New Year holidays," Mohammad Keshavarzzadeh, general director of American affairs, was quoted as saying.

Even before the protests, federal opposition parties, academics and members of the Iranian-Canadian community were already sharply divided over the Liberal plan to restore diplomatic ties with Tehran and that continued Tuesday.

"One of the prime minister's early commitments was to re-engage with Iran and re-open that embassy," said Iranian-Canadian lawyer and human rights activist Kaveh Shahrooz.

"Now I think frankly it's probably time to abandon that promise and focus on the moral act of supporting the protesters."

The Harper government cited several reasons for closing the Canadian embassy in Tehran and ejecting all Iranian diplomats from Canada in 2012, including Iran's support for terror and its abysmal human rights record.

Those concerns remain valid and reason enough not to re-engage even without the protests, said Conservative foreign affairs critic Erin O'Toole, who criticized what he saw as a weak Liberal response to the demonstrations.

"At this time, and with what Iran is doing in the wider region, we don't think we should be focusing on improving relations," O'Toole said. "We should be isolating the regime."

Yet others, such as NDP foreign affairs critic Helene Laverdiere, said the protests underscore the need for Canada to actually have a diplomatic presence on the ground in Iran to monitor and try to influence events.

"Of course, if it reaches a point where we say, 'Look, we cannot move further into renewing diplomatic relations,' it may reach that point," Laverdiere said.

"But I think at this time, it's more important to look towards the future and press the point that Iranian authorities need to respect the right to protest and all sides need to avoid violence."

Thomas Juneau, an expert on Middle East politics at the University of Ottawa, said the Liberals knew the Iranian regime was brutal and repressive when they promised to re-engage with Tehran.

"The broader calculus that it would be in Canada's interests to have an embassy in Iran doesn't change," he said. "(The protests) are something to keep in mind, but it doesn't fundamentally change anything."