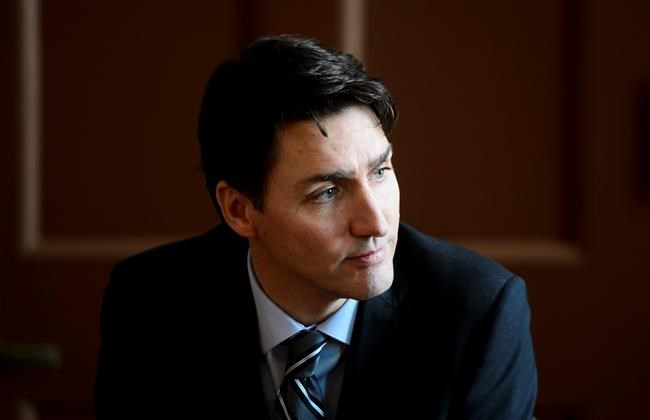 OTTAWA — Prime Minister Justin Trudeau says he and former U.S. Secretary of State John Kerry talked about the then-incoming Trump administration and the general state of the world when the two of them were on the Aga Khan's private island in late 2016.

During an interview this week with The Canadian Press, Trudeau shed a bit more light on his direct interactions with Kerry, who happened to be at the spiritual leader's island in the Bahamas at the same time as the prime minister during his personal — and controversial — family vacation.

In December, the federal ethics commissioner concluded Trudeau violated conflict-of-interest rules when he vacationed at the private island without seeking her approval ahead of time. Mary Dawson's report referenced a "senior American official of a previous administration" present on the island — since confirmed by the Prime Minister's Office to be Kerry.

Trudeau learned "within a few days" or a "small number of weeks" prior to his trip there was a possibility Kerry would be there, he said.

"It was an opportunity to engage with a sitting secretary of state ... but the conversations were very general about the state of the world ... expectations around the incoming administration on foreign policy issues," Trudeau said.

"There was nothing decided or of significant, direct impact on Canadian policy in any way."

The interactions on the island involved "people with interesting jobs and responsibilities" talking about the state of the world in an informed way, he added.

"They were present at, I think, one or two lunches and one or two dinners where there were probably 20 people around the table, mostly family and friends, but topics turned to a ... broad range of general international conversations."

The ethic commissioner's report found the Aga Khan had a relationship with Trudeau's father, Pierre Elliott Trudeau, that developed in the 1960s, facilitating the current prime minister's relationship with the spiritual leader of the world's 15 million Ismaili Muslims.

However, Dawson said it was still unlikely the vacation would have been extended to Trudeau "had there not been official interactions between the government of Canada and the Aga Khan and had Mr. Trudeau not become a significant player on the Canadian political scene."

Those findings have prompted Trudeau to reflect "very much" on the difference between his interpretation of friendship and the view of the commissioner, he said.

"I think it makes total sense that the ethics commissioner has a more stringent view of who would qualify as a friend to the prime minister than others would," he said. "I think that's an important distinction that has certainly, and will certainly inform, my behaviour and the behaviour of future prime ministers moving forward."

Among her findings, Dawson also found Trudeau breached Section 11 of the Conflict of Interest Act — which pertains to gifts or "other advantages" — when he and members of his family accepted the Aga Khan's "gift of hospitality" and the use of his private island.

She said the vacations could reasonably be seen to have been given to influence Trudeau in his capacity as prime minister.

Though now more than a year old, the trip has continued to dog Trudeau, such as during a town hall last week in Nova Scotia, where he reiterated a promise to ensure every one of his future vacations is cleared in advance with the ethics commissioner.

Both opposition parties have also demanded that he repay taxpayers for all or part of the transportation and security costs for the vacation, which they say left taxpayers on the hook for more than $200,000.

Trudeau's office has said he reimbursed the commercial equivalent of his and his family's flights to and from the island, in keeping with standard practice, but has not disclosed the exact tab.

For his part, Trudeau is anticipating more scrutiny from the Conservatives and the NDP when MPs return to Ottawa later this month following the holiday break.

"I am expecting there might be a few more questions once Parliament returns on this ... exact issue."