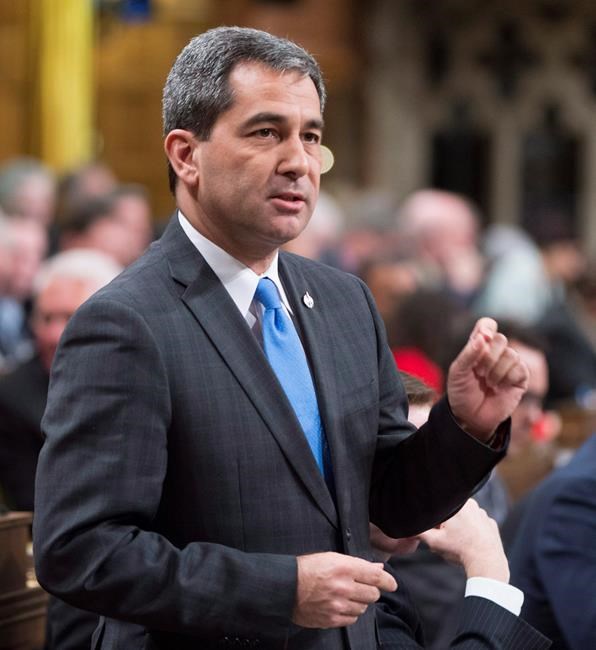 OTTAWA — The official Opposition is calling for an emergency committee meeting about how a man convicted of attempted murder wound up at a prime ministerial event in India.

He was also charged, but not convicted, in connection with a 1985 attack on Ujjal Dosanjh, a staunch opponent of the Sikh separatist movement, who later became B.C. premier and a federal Liberal cabinet minister.

Prime Minister Justin Trudeau's office says Atwal's invitation to a party in New Delhi was revoked as soon as his name was discovered on the guest list.

However, Atwal showed up at a reception earlier in the week in Mumbai and was photographed with Sophie Gregoire Trudeau, the prime minister's wife.

In a statement, Paul-Hus said he wants to know if the director of security operations in the Privy Council Office, the bureaucratic arm of the Prime Minister's Office, screened Atwal.

"Canadians expect that when the prime minister meets with individuals, whether at home or abroad, there is a process to ensure the proper vetting of individuals to ensure that they do not pose a safety or security risk."

Atwal's name was apparently put forward by British Columbia MP Randeep Sarai, one of several Liberal members of Parliament in India with Trudeau. Sarai has acknowledged he should have used better judgment, and Trudeau has promised to sit down with Sarai once they are back in Canada.

A government official, discussing the matter on condition of anonymity, said guest lists for receptions such as those in India are not vetted individually for security. Those who issue the invites are expected to do their own due diligence to ensure their own guests are safe, the official said.

The official also suggested Atwal's presence was engineered by elements within the Indian government to distance the country from Ottawa, driven by concerns that Canada is not fully committed to a united India.

"That is complete nonsense," said Garry Keller, who served as chief of staff to interim Conservative leader Rona Ambrose.

How exactly Atwal got to India — given his criminal history — is a legitimate question, Keller said.

"And that's a valid question for the Indians to consider themselves. But the Indians didn't have control over the guest list at the event. That was ultimately a decision of the Prime Minister's Office."

Keller, who also worked for John Baird when he was foreign minister, said Conservative MPs would often ask that associates be added to guest lists for events abroad.

A roster of those prospective invitees would be forwarded to PMO officials, who would research the names.

"What do we know about this person, who are they? Maybe calling the MP back and saying, 'We've got some questions about this individual you've submitted,'" Keller said.

Then a revised list would go to the RCMP for further scrutiny.

Security vetting is "on the back end of the radar" for the current government, Keller said.

"The high priority is getting the prime minister out there to meet with people. They're clearly willing to sacrifice some of the vetting in exchange for that. And, in this case, I think it's coming back to bite them."

Court records show that Atwal arrived in Canada in 1972 as a teenager, working at sawmills and in the forestry sector until 1986. The next year, Atwal was convicted of attempted murder in the failed assassination.

Although sentenced to 20 years in prison, he was paroled in 1992, became a taxi driver and later sold cars for about seven years.

A B.C. Supreme Court decision in 2010 on an unrelated matter noted that Atwal "became a top salesman" during his time at dealerships.

Atwal has moved in Liberal circles for years, posing with Trudeau before he became prime minister and posting pictures to his personal Facebook page.

Elections Canada records show Atwal made a $500 donation to the Liberal candidate in the British Columbia riding of Fleetwood-Port Kells during the 2011 federal election, one which saw the Liberals finish a distant third in the riding.

Around the same time, Atwal reportedly became a member-at-large for the Liberal riding association executive. A former Liberal candidate in B.C. told the Vancouver Sun in 2012 that Atwal attended local fundraisers and was well-known for his work with the federal and provincial Liberals.

Also in 2012, Atwal was a guest of the B.C. Liberals for their provincial budget speech. Once his attendance in the public gallery became public, the regional director with the party who sent the invite resigned his position and called the invitation an error in judgment.

Ashiana Khan, CEO of Surrey radio station Media Waves, said she knew Atwal because he often dropped by the station or called with opinions and news tips. He enjoys being the person who has "all the knowledge of the community," she said.

Atwal is most involved with the B.C. Liberals and federal Liberals, she said, but she has also seen him with politicians from other parties, including the federal Conservatives and B.C. New Democrats. He enjoys posting photos of his encounters on social media, she said.

"Some people have that thing in them that they want to have pictures and boast about it," she said. "It's not just politicians, he does it with (the) film industry as well. He's a person who wants to be around celebrities and famous people."

Khan said she never spoke with him about Indian politics, but she was surprised he'd been allowed into the country given his past. He is well-liked by some in the community because he's a friendly, charming guy, she said.

"If I didn't know anything about his criminal activities back then, then I would say he's a nice person."