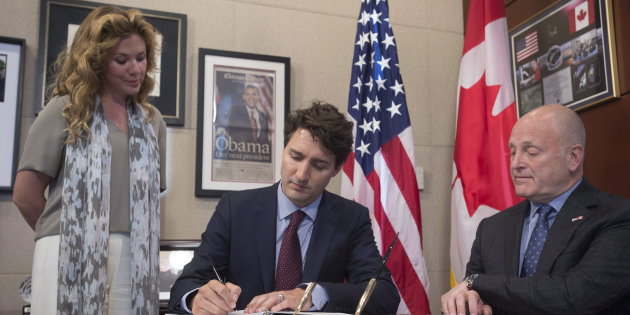 Sophie Gregoire Trudeau and the Ambassador of the United States to Canada Bruce Heyman look on as Canadian Prime Minister Justin Trudeau signs a book of condolence at the United States embassy, in Ottawa on Tuesday, June 14, 2016. The Prime Minister visited the U.S. embassy to pay his respects for the nation as it grieves the killings of 49 patrons at a gay nightclub in Orlando, Florida. THE CANADIAN PRESS/Adrian Wyld

Donald Trump is picking a fight with Justin Trudeau because he needs someone to blame for failing NAFTA talks, a former United States ambassador to Canada says.

Bruce Heyman, a former appointee of president Barack Obama, told HuffPost Canada on Monday that he believes this weekend’s comments from the U.S. president and his senior advisers are part of an orchestrated campaign to move the goalpost on free trade talks.