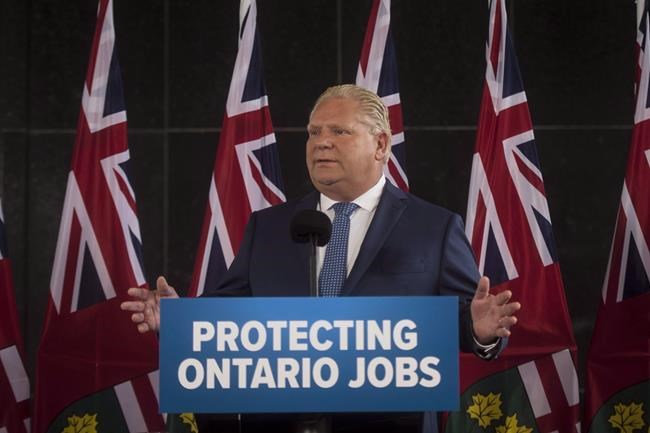 TORONTO — Ontario's incoming premier has put the public service under a hiring freeze as part of a series of measures meant to limit spending as he re-examines the province's books, raising concerns among some government workers.

"The people of Ontario work hard for their money and they expect their tax dollars to go to the services we all depend on," Simon Jefferies said in a statement.

"We are also going to go line by line through the government's books to ensure value of money for the people of Ontario's tax dollars."

During the election campaign, Ford promised to launch an audit of government spending and to save billions each year by finding unspecified efficiencies, without cutting any jobs.

The exact scope of the hiring freeze remains unclear but a source within the party says essential frontline staff, including those in policing, corrections and fire services, are exempt.

Any other hiring, aside from lateral moves within the public service or appointments required to fulfil collective agreements, must be officially approved by cabinet office before going forward.

The Tory cabinet is expected to be officially sworn in on June 29, however, a memo sent to deputy ministers and posted on the government website said the spending restrictions are effective immediately.

"Any planned expenditures that are not committed by contract and/or required to meet immediate legal obligations or address matters of health and safety are to be deferred pending further direction," it said.

"In cases where work is in progress, an assessment should be undertaken and available options exercised as appropriate to slow and/or temporarily stop activities until further direction is received."

Other cutbacks include a ban on providing food and drinks for staff meetings and events, the cancellation of subscriptions to paper-based media such as magazines and newspapers, and reduced attendance at out-of-province events including intergovernmental meetings.

Ford's office did not immediately respond when asked how much money the new measures were expected to save.

The head of the Ontario Public Service Employees Union said he's not surprised by the decision to suspend hiring, but has concerns about how it may affect services and the 34,000 public sector workers the union represents.

"People want to know, 'Am I going to get laid off? Am I still going to be doing the work of three people because my unit's been short...two people?'" he said. "They're just worried about being able to do their job."

He said questions remain about who will be exempt from the freeze and how long it could last.

Thomas said he sent Ford a letter last week asking for a meeting and reminding him of his promise not to lay off any workers in his belt-tightening efforts, but said the premier-designate has yet to take him up on the offer.

Peter Graefe, a political science professor at Hamilton's McMaster University, said Monday's announcement is a fairly effective strategy to make it seem "like you're doing something even when it's kind of clear that it's not really that well thought through yet."

"A hiring freeze is kind of a classic way of saying you're going to be saving money by shrinking the size of the public sector...but it's also a way of saying that you actually don't have priorities because places are going to shrink or grow simply based on where people retire or leave for other places," he said.

Graefe also said that the Ontario government already spends less per capita than most other provinces and an audit of the books is unlikely to uncover major waste.

More likely, he said, is that public sector consultants will come in and weigh in on the services being provided by government.

"The suggestions will be, 'well these are things that the public sector shouldn't be doing,' which again is fine, but that's not about waste, that's about making decisions about what should be public and what should be private."