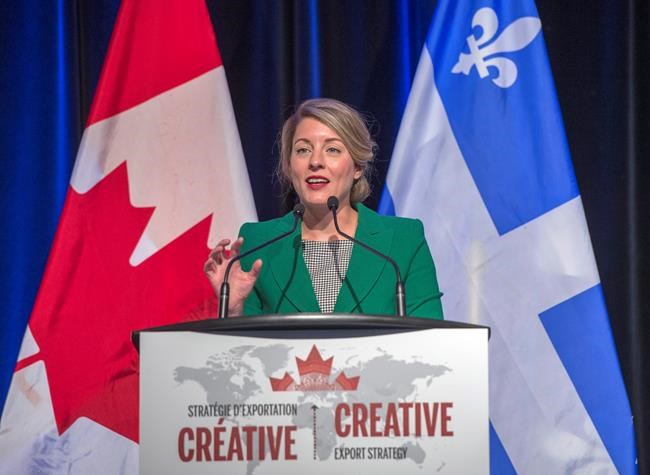 MONTREAL — Ottawa is getting ready to invest $125 million over five years for the Canadian arts by increasing existing budgets for domestic programs, expanding the eligible sectors that can receive money and by helping artists export their work internationally, Heritage Minister Melanie Joly said Tuesday.

Calling it a "strategy with teeth and money," Joly told reporters the federal government decided to expand the sectors eligible for arts funding to include industries such as video gaming, design, virtual reality and fashion.

"For the first time in our history, all these disciplines will be supported (financially)," Joly said at the announcement in Montreal.

The Liberals are reinvesting in sectors ignored by the former Conservative government under Stephen Harper, which cut funding for programs that exported Canadian art into foreign markets, Joly added.

Included in the funding is $7 million a year for a new program called Creative Export Canada, which will help domestic artists find foreign buyers and audiences for their work.

Heritage Canada said cultural product exports were valued at $16 billion in 2016 and accounted for 2.5 per cent of all Canadian exports.

The Canadian arts and culture sectors account for more than 650,000 jobs and represent 2.8 per cent of the country's GDP.

"It really depends on the sector, but we know there is a growing middle class in emerging markets looking for great content," Joly said.

"I think we are unique in the world and we're sometimes stronger than we think," she added. "I think there are a lot of people interested in seeing our great artistic exports."