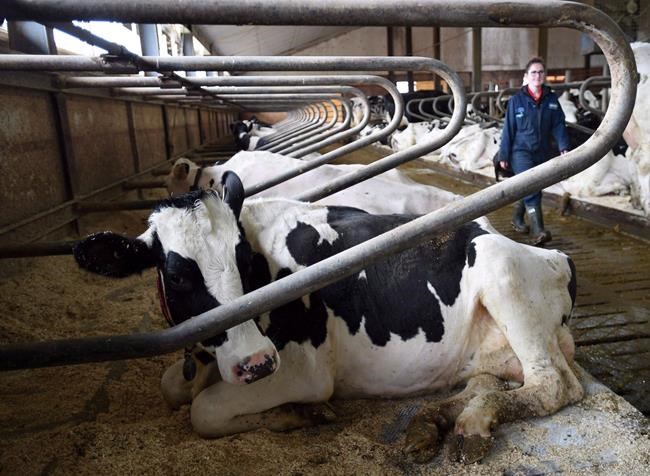 OTTAWA — Canada's protected supply-managed dairy industry emerged as a major 11th-hour irritant as the Trudeau government returned Tuesday to what could be the final, pivotal round of talks to salvage the North American Free Trade Agreement.

Two of Donald Trump's top lieutenants turned up the heat on Canada to open up the protected sector that the U.S. president has repeatedly attacked. But Prime Minister Justin Trudeau remained unmoved.

The pressure came one day after the U.S. president again blasted the Canadian dairy industry during his announcement of a trade agreement with Mexico that he said could replace NAFTA.

Late Tuesday, the Globe and Mail reported that Ottawa was prepared to make concessions to Washington on Canada's dairy market. The offer, the report said, is part of an effort to save a dispute-settlement system within NAFTA, maintain safeguards for cultural industries and avert tougher pharmaceutical patent protections.

The report said Ottawa tried to offer more dairy market access to the U.S. during NAFTA talks in May, but the U.S. declined.

Dairy is a politically charged issue that many analysts have predicted would be among the final conflicts to be addressed in the NAFTA renegotiation. In Canada, it is a near-$20-billion industry that employs more than 220,000 people. Supply management is considered sacrosanct in Quebec and Ontario — Canada's two largest provinces, which mark the path to power for all political parties.

Trump imposed a Friday deadline for Canada to join the U.S. and Mexico, which is when the administration plans to give Congress its mandatory 90-day notification of the new trade deal.

Commerce Secretary Wilbur Ross and Larry Kudlow, the director of the president's National Economic Council, said in separate television appearances on Tuesday that concessions from Canada on dairy are essential to getting a three-way deal by then.

"They may have some problems with the kinds of concessions we need," Ross told the Fox Business News program Mornings With Maria.

"They've been very bad to our farmers, particularly to our dairy farmers. The president has made clear that's not something that's agreeable to him."

Kudlow told the Fox show Varney and Co. that Trump would "love" to make a deal with Canada. But he said it has to be "a good deal which is in the interests of the American economy, the American workforce, American farmers."

The Trudeau government has repeatedly pledged to protect dairy farmers, but Canada has opened up limited access to its dairy market in previous trade talks, including its comprehensive pact with the European Union.

The prime minister sidestepped a question Tuesday about whether he would be willing allow more access to the Canadian market.

It's not clear that the United States actually wants to destroy supply management. Much of the American ire is focused on Canada's decision to introduce a new classification of dairy product.

The head of Saputo Inc., Canada's largest dairy processor, told The Canadian Press in June that the NAFTA dairy impasse with Trump can be resolved if Canada ends Class 7.

Dairy Farmers of Canada has said that ending Class 7 is out of the question.

On Tuesday, the organization released a statement re-iterating the need for Ottawa to protect supply management. It made no mention of Class 7. Officials from the dairy lobby were unavailable for interviews.

On Monday, as Trump piled on his with his long-standing criticism of Canadian dairy, he did not single out supply management specifically. "You know, they have tariffs of almost 300 per cent on some of our dairy products, so we can't have that. We're not going to stand for that," he said.

Trump then dangled the possibility of imposing harsh auto tariffs to punish Canada. The Commerce Department is currently investigating whether to impose tariffs of 25 per cent on Canadian autos under national security provisions in U.S. trade law.