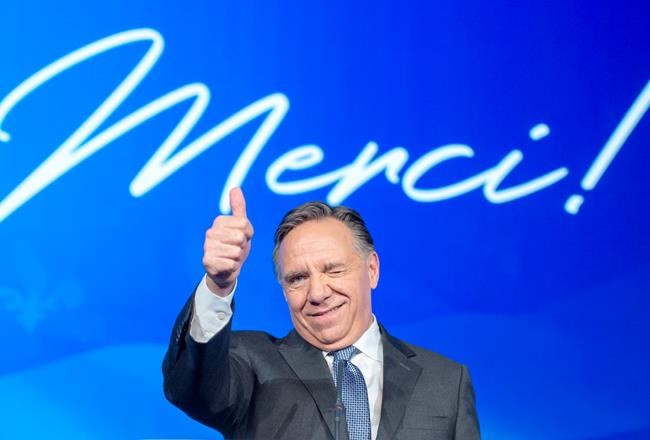 QUEBEC — The day after a momentous election victory in which he re-drew Quebec's political map, Premier-designate Francois Legault sought on Tuesday to reassure Quebecers and other Canadians uncertain what to expect from his government.

"I am a pragmatic guy," Legault said at his first news conference since his Coalition Avenir Quebec won 74 of the province's 125 ridings. "We are a pragmatic party."

He said he wants to build a "strong Quebec inside Canada" and to reduce Quebec's dependence on equalization payments from the federal government.

But the first provincial government since the 1960s to be neither Liberal nor Parti Quebecois will be strongly nationalist with a focus on the Quebec identity issues that helped bring it to power.

The Coalition leader told reporters he has no intention of softening his controversial campaign promises to reduce annual immigration to Quebec and institute language and values tests for recent arrivals. And he said he would invoke the notwithstanding clause if necessary to override the Charter of Rights and Freedoms and ensure public officials in positions of authority wear no religious symbols.

Monday's election was a big blow to the parties that for decades made up Quebec's political establishment.

Outgoing Premier Philippe Couillard's Liberals, at 32 seats, lost more than half of what they won in 2014 while the PQ, at a paltry nine seats, was stripped of its official party status. Both hit all-time lows in the popular vote.

Losing party status means the PQ, the party of Rene Levesque that once claimed to represent the collective aspirations of the Quebecois people, will lose speaking time in the legislature and money for research budgets.

Legault promised to "put money back in the wallets of Quebecers," invest more in early detection for learning disabilities in children, and reorganize the health-care system so it's more efficient.

But the Coalition leader also said that starting next year, 10,000 fewer immigrants will be arriving annually in Quebec, dropping from the current level of 50,000.

"At 40,000 immigrants a year, Quebec will receive more, per capita, than the United States and France," Legault said in defence of his policy. "Our objective is to better integrate them, teach them French, find them a good job and recognize their diplomas."

He was asked about international headlines labelling his party anti-immigrant because it plans to expel newcomers who cannot pass French-language and values tests three years after their arrival.

"I want to be uniting," he said. "We want to integrate them and continue to receive them. The image of Quebec (internationally) will depend on the actions that we pose, and I want to do things that show that Quebec is inclusive."

Another Coalition campaign promise sure to cause friction is the ban on religious symbols for state employees working "in positions of authority," such as judges, police officers and teachers.

"I think the vast majority of Quebecers, they would like to have a framework where we say that people in authority positions must not wear religious signs, and if we have to use the notwithstanding clause to apply what the majority of Quebecers want, we will do so," he said.

Legault also told the news conference in Quebec City he would be speaking later in the day with Foreign Affairs Minister Chrystia Freeland about the new United States-Mexico-Canada Agreement.

Legault said he had not been briefed on the specifics and has not ruled out any measures to respond to a deal that has been denounced by Quebec dairy farmers.

As for the rest of Canada, Legault said it has nothing to worry about because his government will be "collaborative."

"I think many things can be done between Quebec and Canada regarding the economy. We have common challenges in improving productivity of our companies," he said.