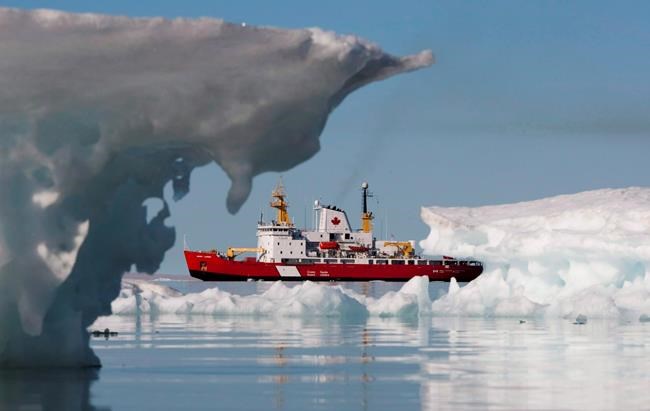 IQALUIT, Nunavut — The federal Liberal government is turning its face to the North with changes in a major ministry and at the Canadian Coast Guard.

"It is definitely a step toward a northern strategy," Fisheries and Oceans Minister Jonathan Wilkinson said Wednesday in Iqaluit, Nunavut. "This is a pretty significant step forward."

Together with the president of Canada's national Inuit organization, Wilkinson announced his department and the coast guard will have divisions solely devoted to Arctic affairs.

Responsibility for the North has been divvied up between west, east and central divisions. Having the entire region under one administration will make a big difference, said Natan Obed of Inuit Tapiriit Kanatami.

"This (division) will need to make very clear decisions around ensuring that Inuit communities are supported through the coast guard in a more comprehensive way, whether that's search and rescue or breaking ice for (community) resupply," he said.

Wilkinson said there will be consultations across the North on the department and the coast guard.

"Part of the announcement today is saying to northerners, 'Made-in-Ottawa solutions for the North really haven't been that effective.' We want to develop made-in-the-North solutions."

One critic suggested the reorganization will be ineffective without more money and a real commitment to the North.

"The coast guard is so chronically underfunded," said Rob Huebert, a political science professor and Arctic expert at the University of Calgary.

"It's always about the shell game — let's reorganize it in some way that will solve the real problem, which is underfunding."

Huebert said the Arctic has not been a priority for the Liberals. He noted that the government still hasn't developed an overall policy for the region despite election promises to create one early in its mandate. The value of Wednesday's announcement is still unknown, he said.

"Is this about saying, 'Yes, we're doing something different and creating a new zone just prior to the election to cover up the fact that so little has been done on the Arctic file' or is it the precursor of something more meaningful?'"

Huebert said the purchase in August of three used icebreakers as a 20-year stopgap before a new one is built is an example.

"We're just back to replacements, with something that hasn't been planned for."

"There is a northern strategy that is under development."

Obed praised the federal government for working with the Inuit. His group was consulted on who was hired to lead the Arctic divisions — both of which will be headquartered in the North.

"The ongoing relationship continues a true partnership in trying to understand how to create a space that has an Inuit-centred policy and ensure that the region functions as well as it possibly can," he said.

Note to readers: This is a corrected story. A previous version said the announcement was made by Dominic LeBlanc.