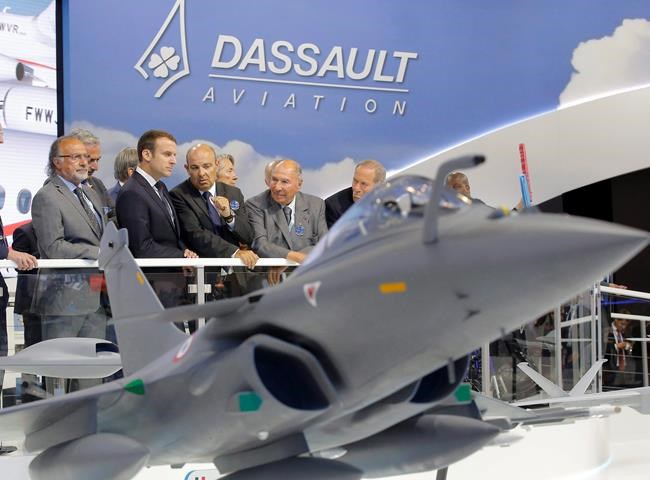 OTTAWA — The long effort to replace Canada's aging fighter jets took another surprise twist on Tuesday, as multiple sources revealed that French fighter-jet maker Dassault is pulling out of the multibillion-dollar competition.

The decision comes just over a week after the federal government published the military's requirements for a replacement for Canada's CF-18s as well as a draft process by which a winning supplier will be chosen.

Dassault had repeatedly pitched its Rafale aircraft to Canada over the years as successive governments in Ottawa have wrestled with selecting a new fighter jet. Dassault's pitch included significant promises, including that it would assemble the planes in Canada.

But sources tell The Canadian Press that Dassault's decision to withdraw was related to the fact France is not a member of the Five Eyes intelligence-sharing network, which counts the U.S., Britain, Australia, New Zealand and Canada as members. The five members have very specific requirements for how their equipment works together.

The French government, which had been closely working with Dassault as the most recent iteration of Canada's fighter-replacement program has inched along over the past year, was preparing to notify Ottawa of the company's withdrawal.

A contract isn't expected to be awarded until 2021 or 2022, with delivery of the first new aircraft slated for 2025. In the meantime, the government is planning to upgrade its CF-18s and buy 25 used fighters from Australia as a stopgap.

Dassault faced several significant challenges in meeting Canada's requirements for a new fighter, said defence analyst David Perry of the Canadian Global Affairs Institute, and while they weren't insurmountable, they would have cost time and money.

Those challenges included meeting those Five-Eyes intelligence-sharing requirements, which Perry said put Dassault at a distinct disadvantage in the competition when compared to Lockheed Martin, Boeing and, to a certain degree, Airbus.

"For any of the non-American companies, solving the Five-Eyes interoperability issues is going to be challenging," he said, noting that the U.S. in particular is very sensitive about data-sharing.

"And it costs companies a lot of money to mount and pursue bids. So if they think at this point in time that it's not a realistic prospect, then pulling out is pretty understandable."

That could explain why Dassault never established a strong presence in Canada during the many years when it was trying to sell the Rafale as a replacement for the CF-18, he added.

The CF-18s are about 35 years old. Canada's attempts to buy a new fighter jet have dragged on for nearly a decade after the previous Conservative government announced in 2010 that Canada would buy 65 F-35s without a competition, with the first to be delivered in 2015.

But the Tories pushed the reset button in 2012 after the auditor general raised questions about the program and National Defence revealed the jets would cost $46 billion over their lifetimes.

After campaigning on a promise not to buy the F-35s, the Trudeau Liberals announced in November 2016 they would take their time with a competition to replace the CF-18s, and buy 18 "interim" Boeing Super Hornets without a competition because Canada needed more fighter jets badly.

But then Boeing’s trade dispute with Canadian rival Bombardier saw the Liberals scrap their plan to buy Super Hornets and instead begin talks to buy 18 used fighter jets from Australia. A contract for those used planes is expected in the coming weeks.

The formal competition to replace the CF-18s is scheduled to begin next spring.