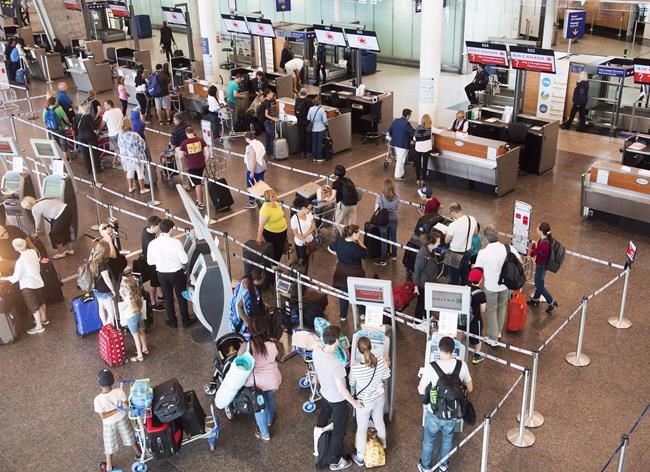 OTTAWA — Air passengers who are bumped from overbooked flights or forced to sit through long delays could receive up to $2,400 in compensation — cash or something more than a pile of coffee coupons — under proposed regulations for the government's long-promised passenger bill of rights.

The proposed compensation will use a sliding scale, with larger airlines and longer delays requiring bigger compensation payments. Payments to passengers whose flights are delayed will max out at $1,000 and cancellations at $2,400 — but it will be up to the passenger to file a claim with the airlines.

Once draft regulations are published Saturday, Canadians will have 60 days to comment — meaning there may be one last battle between consumer advocates and airlines over the breadth of the proposed regulations.

Consumer advocates said Monday that they planned to push the government to further tighten rules around tarmac delays and when an airline can get out of paying compensation.

"We want to make sure that the government doesn't take any steps back in what they've already announced, and, if possible, we can move them forward even further," said Ian Jack, managing director of communications and government relations for the Canadian Automobile Association.

"The public is being deceived here by the government. This has been an industry-friendly legislation that the minister cynically calls an air passenger bill of rights," Lukacs said.

The draft regulations lay out the minimum standards airlines will have to follow for situations in their control — or face a $25,000 fine. The aim is to have the rules take effect by next summer.

Aside from situations beyond their control, there are loopholes that could allow an airline to get off the hook for compensation — specifically mechanical issues as defined by the airlines that make it unsafe to fly. Advocates are already calling for a tighter definition so the loophole isn't abused.

Transport Minister Marc Garneau was adamant airlines won't mess around with safety and dismissed the idea that companies will look for ways to get out of compensating passengers.

"If that were to happen — and I don't believe for one second it will happen — there would be measures taken to penalize them," Garneau said.

The regulations would also force airlines to automatically seat children under age 14 near their parents rather than require them to pay an additional fee to select their own seats. The rules allow airlines to select seats one seat or one row away from parents for older children.

The regulations would also require airlines to provide food, water, air conditioning and use of bathrooms during tarmac delays, but not require a flight unload passengers until a delay hits three hours.

However, the three-hour limit can get one 45- minute extension if the flight is likely to take off during that period.

A Senate committee recommended no more than 90 minutes after a high-profile incident at the Ottawa airport where two Air Transat flights sat on the sweltering tarmac for hours.

"We chose a time of three hours that...will be applicable to all airlines that we think is fair and that basically achieves that balance between recognizing that at some point you've got to let people off; and on the other hand the other part of it is, people do want to get to their destination," Garneau said.

Scott Streiner, the chairman of the Canadian Transportation Agency, says a key aspect of the rules is an expectation that airlines clearly communicate with passengers about the status of their flight.

A federal analysis pegged the cost to airlines of the new regulations at $2.75 per passenger, and Streiner said it's not clear if airlines will pass those costs along to consumers.

On compensation to passengers, Streiner said the airlines asked for levels that wouldn't be "punitive."