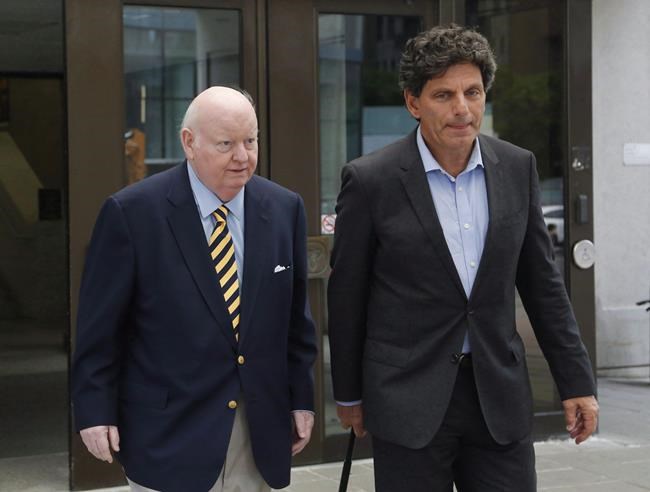 OTTAWA — Sen. Mike Duffy is asking Ontario's Court of Appeal to overturn a decision blocking him from suing the Senate for millions of dollars over his dramatic and protracted suspension without pay more than five years ago.

Last month, Ontario Court Justice Sally Gomery ruled the Senate's decision to suspend Duffy is protected by parliamentary privilege — a centuries-old right designed to protect legislators from having to answer to judges for doing their jobs — meaning Duffy can't take the Senate to court over its actions.

The appeal Duffy's lawyers filed Thursday says the ruling erred in law on a number of fronts by extending the scope of that privilege, essentially equating privilege with immunity.

Duffy is asking the appeal court to set aside Gomery's ruling and order the Senate to cover his legal costs.

The decision to appeal is part of the P.E.I. senator's efforts to wrestle compensation from the Senate for the two years he was without pay, and also to send a statement to senators that privilege doesn't put them above the law, Duffy's lawyer said.

"The damages that were suffered by Sen. Duffy were as a result of the actions, in large part, because of the Senate," Lawrence Greenspon said in an interview.

"They basically acted, we say, in such a way that they should be subject to civil action and the immunity that they've claimed under this privilege is far too broad and, we say, needs to be judicially considered."

Duffy is seeking $7.8 million in damages from the Senate, RCMP and federal government in the wake of the high-profile investigation of his expense claims, which culminated in his acquittal on 31 criminal charges in 2016.

His claim against the Senate alleges "an unprecedented abuse of power" when a majority of senators voted to suspend him without pay in November 2013, before any criminal charges had been filed.

Charges arrived in July 2014, when the RCMP filed 31 counts of fraud, breach of trust and bribery against him.

In April 2016, Ontario Court Justice Charles Vaillancourt dismissed all the criminal charges in a lengthy and dramatic ruling that said Duffy was forced to take a $90,000 payment from Nigel Wright, Stephen Harper's then chief of staff, to pay off his politically problematic housing expenses, even though Duffy contended he had done nothing wrong.

Duffy's appeal argues the ruling shows his Senate suspension was "egregious, politically motivated, and potentially illegal" and shouldn't be protected by parliamentary privilege.

"To now turn around and say, whatever we did is covered by privilege, just I think is fundamentally wrong," Greenspon said. "You can't have any individual, or group, or government, or arm of government above the law."

The Senate said parliamentary privilege gives it the right to "control its own proceedings," including "disciplinary authority over its members, free from outside interference."

Gomery, in her ruling, said allowing a court to review the Senate's decisions on Duffy would damage the upper chamber's ability to function as an independent legislative body.

Duffy's lawsuit will be put on hold until the appeal is settled with a hearing likely later this year.