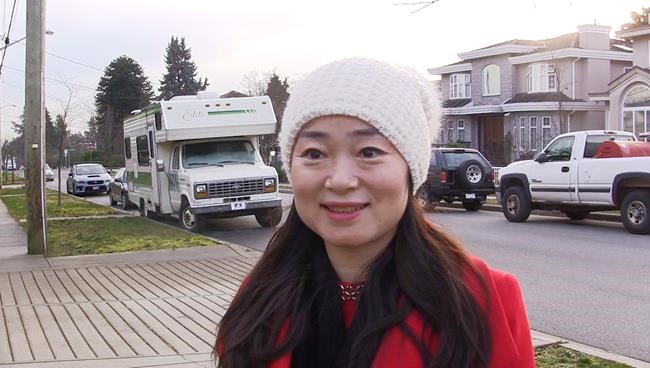 VANCOUVER — A former Liberal byelection candidate says her political career is "probably" over after an online post singled out NDP Leader Jagmeet Singh's ethnicity, but she's still considering running as an Independent.

With her crying mother and sister at her side, Karen Wang said during a hectic news conference Thursday that she is not a racist and she has many friends of Indian background in the Burnaby South riding.

"Recently, I have been labelled a racist, which really, really makes me hurt. I feel like I am abused and I am insulted, and this is not me at all. I am not a racist," she said through tears.

Wang stepped down Wednesday after StarMetro Vancouver reported she posted on Chinese social media platform WeChat that she was the "only" Chinese candidate while Singh — her opponent in the byelection — was "of Indian descent."

She said a campaign volunteer wrote the controversial post and she didn't have time to proofread it. But she said she isn't angry with the volunteer and she takes the responsibility.

"Nobody is perfect. We make mistakes, and myself too," she said. "I wouldn't have mentioned anybody's cultural background."

Wang added the volunteer meant to make a "statement of fact" by pointing out Singh's ethnicity, rather than a "racial statement."

Wang, who was still wearing a Liberal button on her coat, said she was asked by the party to resign on Wednesday. Someone else wrote her apology and she approved it before speaking to the media, she said.

She said she believes the apology was warranted and she hopes to say sorry to Singh in person.

The party said earlier Thursday that Wang's online comments don't align with its values and her resignation still stands. Elections Canada has accepted her withdrawal, it added.

The Liberals did not have a strategy to target Chinese-Canadian voters in the riding, Wang said.

Wang, a daycare owner who ran unsuccessfully for the BC Liberals in 2017, said she'll speak with her supporters and decide whether to run as an Independent before the Feb. 4 deadline to enter the race.

But asked if her political career was over, she replied, "Probably."

"It doesn't matter if I have a political career or not," she said. "I always think giving back to the community and contributing to society, you have lots of ways to fulfil your dream.

"I have already fulfilled my Canadian dream step by step. I have a successful business. I have a family."

Her news conference got off to a chaotic start when she was asked to leave Burnaby Public Library property. Chief Librarian Beth Davies said Wang didn't make a formal request to hold her event outside the building.

Wang and her family moved to a nearby sidewalk, where they were swarmed by reporters. She told the media she grew up in a Chinese village and moved here with her husband 20 years ago, "with zero."

Singh, who is Sikh and speaks Punjabi, accepted Wang's apology on Wednesday while expressing concerns about "divisive politics."

"We see that in the south — divisive politics and how it tears apart a country. I want to focus in on politics that bring people together," he said.

The Liberals have not yet said whether they will replace Wang. The byelection is scheduled for Feb. 25.

The New Democrats narrowly beat the Liberals in the riding in the 2015 election by about 550 votes. The Conservatives placed third, losing by about 3,600 votes.

Green Party Leader Elizabeth May urged the Liberals to follow her party's lead in offering a "leader's courtesy" to Singh by not running against him.

Hann did not directly address the controversy around Wang's WeChat post, but did take aim at Singh, saying he is "using the residents of Burnaby South to save his political life."

— With files from Teresa Wright in Ottawa