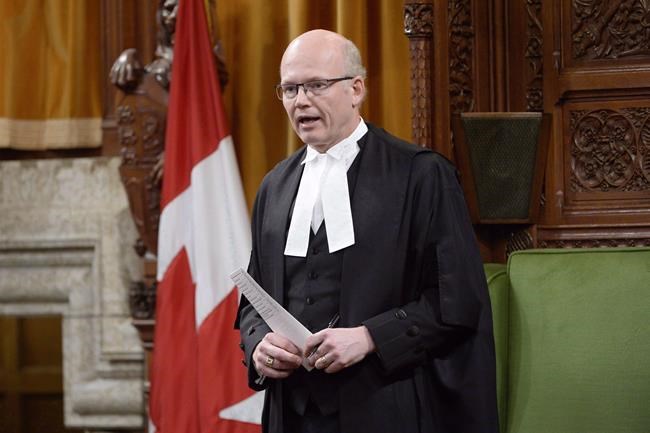 OTTAWA — The referee of the House of Commons has given MPs a stern warning about their use of overheated partisan rhetoric lest they find themselves in a parliamentary penalty box.

Speaker Geoff Regan says he'll cut off MPs if their comments are couched in wording that veers into pointed, personal accusations during the daily question period.

For days, the Opposition Conservatives have referred to the trust fund and personal wealth of Prime Minister Justin Trudeau, as well as of Finance Minister Bill Morneau, in attacking the Liberals over the deep deficits they've run while in office.

The attacks sharpened after Trudeau remarked this week that low-income Canadians don't pay taxes, which the Conservatives argued showed how out of touch he is with everyday Canadians.

Before the start of Thursday's question period, Regan took two minutes to let MPs known he was going to start putting his foot down.

Regan said anyone who skirts the line between legitimate question and personal attack may be cut off and find their turn to question the government is passed along to another MP.

"I have listened carefully and patiently — perhaps too patiently — to questions put forward this week, some of which clearly fell outside of the scope of permissible questions since they had little to do with the administrative responsibility of the government," Regan said.

"I will not allow such questions or such personal attacks. I will interrupt any member who asks a question that raises a matter that does not properly deal with public policy."

His words drew heckles from the Tory benches and applause from the Liberals.

Regan chided both sides for their responses.

Later on, he cut off Liberal MP Matt DeCourcey when he accused the Conservatives and their leader, Andrew Scheer, of "Scheer-mongering" over immigration.

When question period ended, DeCourcey told the Commons he would retract the comment, and asked to insert the word "fear mongering" instead, drawing a round of jeers from the Tory benches.

DeCourcey agreed. He said he would "retract my use of the word" — and then added a "but."

Regan cut him off — again.

"Just to be clear," Regan said, "unconditionally doesn't mean including the word 'but.' There are no 'buts.' Now that's enough."

NDP MP Nathan Cullen was up next.