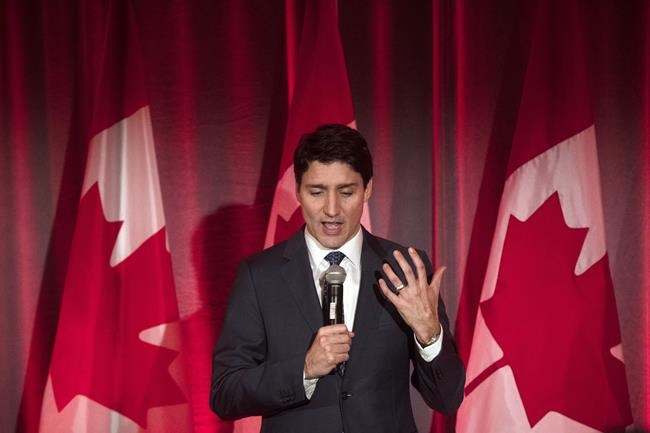 OTTAWA — Former attorney general Jody Wilson-Raybould was involved in extensive, internal government discussions last fall about whether SNC-Lavalin should be allowed to avoid criminal prosecution — and government officials maintain there's nothing wrong with that.

They argue the discussions were all perfectly within the law and, indeed, the government would have been remiss not to deliberate over the fate of the Quebec engineering and construction giant given that a prosecution could bankrupt the company and put thousands of Canadians out of work.

The officials spoke on background Friday to The Canadian Press on condition that their names not be used, even as Conservatives and New Democrats demanded investigations by a House of Commons committee and the federal ethics commissioner into allegations that Wilson-Raybould was pressured by Prime Minister Justin Trudeau's office to help SNC-Lavalin avoid prosecution.

Wilson-Raybould's continued refusal to comment on the allegations added fuel to the political fire, started Thursday by a Globe and Mail report that she was demoted in a cabinet shuffle early last month because she refused to intervene in the SNC-Lavalin case. In a statement Friday morning, Wilson-Raybould, now veterans-affairs minister, said she is bound as the former attorney general by solicitor-client privilege and cannot publicly talk about aspects of the case.

The company has been charged with bribery and corruption over its efforts to secure government business in Libya and wants a deal, allowed under the law, to pay reparations rather than be prosecuted.

Toronto Liberal MP Arif Virani, the parliamentary secretary to current Justice Minister David Lametti, issued the most sweeping public denial of the story the government has issued so far.

"At no point has the current minister of justice or the former minister of justice been directed or pressured by the prime minister or the Prime Minister's Office to make any decision on this or any other matter," Virani told the House of Commons on Friday. "The attorney general of Canada is the chief law officer of the Crown and provides legal advice to the government with the responsibility to act in the public interest. He takes those responsibilities very seriously."

But no pressure does not mean there were no discussions about the issue, officials said. And the fact that the attorney general is supposed to be above political considerations does not mean he or she can't be involved in those discussions.

In part, that's because the attorney general in Canada wears a second hat as justice minister and, in that role, is expected to fully take part in all public-policy discussions around the cabinet table. Moreover, as justice minister, Wilson-Raybould was responsible for a 2018 Criminal Code amendment at the heart of the current controversy — which specifically allowed for what's known as deferred prosecutions or remediation agreements to be negotiated rather than pursue criminal prosecutions against corporations.

The amendment was intended to bring Canada in line with its other major allies, including the United States, the United Kingdom and France, which all have similar provisions in their laws. The idea behind it is that a corporation should be held to account for wrongdoing without facing a prosecution that could bankrupt the company and make innocent employees pay the price for the actions of some unethical executives.

Consequently, they said, it was natural that internal discussions would have taken place after the director of public prosecutions, Kathleen Roussel, informed SNC-Lavalin last October that a remediation agreement would be inappropriate in this case. The company is challenging her decision in court.

SNC-Lavalin has taken out newspaper ads and heavily lobbied ministers, government officials and even Conservative Leader Andrew Scheer and NDP Leader Jagmeet Singh to make its case for avoiding a prosecution. Quebec Premier Francois Legault has also pressured Trudeau directly to intervene on the company's behalf.

Under the law, the attorney general may issue a directive to the director of public prosecutions on how to handle a specific case, provided the directive is in writing and made public.

Given the jobs at stake, officials said, the government would have failed in its duty had there not been discussion about whether to intervene in the SNC-Lavalin case. As justice minister, Wilson-Raybould would have been involved in those discussions. And even in her role as attorney general, she was not precluded from consulting her colleagues on whether to instruct the public prosecutor to negotiate a remediation agreement.

Officials pointed to a document entitled "Open and Accountable Government" on the PMO website, which spells out the conduct expected of ministers, including a lengthy section on the dual role of the justice minister and attorney general. On the matter of issuing directives to the director of public prosecutions (or "DPP"), the document says: "It is appropriate for the attorney general to consult with cabinet colleagues before exercising his or her powers under the DPP Act in respect of any criminal proceedings, in order to fully assess the public policy considerations relevant to specific prosecutorial decisions."

(A check of an Internet archive showed that the passage has been in the document since it was first posted in 2015.)

None of that is likely to matter with opposition politicians, who maintain the whole affair smells like obstruction of justice. The Conservatives' Scheer and the New Democrats' Singh both called Friday for an ethics probe into the allegations.

Conservatives and New Democrats on the Commons justice committee are also joining forces to get an emergency meeting next week to consider a motion calling on nine high-ranking government officials to testify, including Wilson-Raybould herself.

"If the prime minister has nothing to hide, as he has suggested, then he should have no reason to fear these individuals appearing before the justice committee," Scheer said in a Friday morning news conference on Parliament Hill. "MPs have a duty to determine what exactly happened here and Justin Trudeau and his office must be forthcoming."

Singh similarly argued that the prime minister should have nothing to fear from an independent investigation by the federal ethics commissioner.

"All this cries out for some serious investigation," he said in a telephone interview from Burnaby, B.C., where he's campaigning for a seat in the House of Commons in a Feb. 25 byelection.

Both Scheer and Singh argue the issue cuts to the heart of our democracy and independent system of justice.

"The allegations that we are hearing in the last 24 hours are unprecedented," Scheer said.

Singh accused the government of sacrificing justice in the interests of a multinational corporation. He said the allegations suggest there may have been possible violations of three sections of the federal Conflict of Interest Act: the prohibitions against public office holders giving preferential treatment to any individual or organization, using insider information to improperly further a person's private interests or seeking to influence a decision to further another person's private interests.