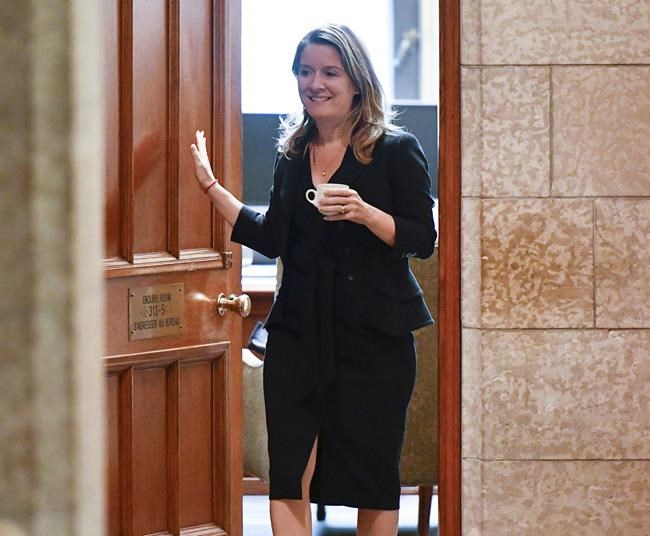 The allegation is contained in a lawsuit filed by Vivian Bercovici, a former Canadian ambassador to Israel, who was appointed by the previous Conservative government of Stephen Harper and subsequently fired by the Trudeau Liberals.

Bercovici alleges she was terminated without being properly compensated for pension benefits, and that the government abused and harassed her.

On Monday, her lawyer will petition the Ontario Court of Justice to amend the lawsuit to have Telford and four senior officials of Global Affairs Canada added as defendants.

The allegations have not been proven in court, and the Prime Minister's Office did not respond to a request for comment.

The Justice Department says in a reply filed in court last month that Bercovici's "bold allegations" should be dismissed.

Bercovici has been a source of controversy since Harper appointed her as his envoy to Israel in 2014. She was not a career diplomat — which is not unusual for high-profile ambassadorial appointments — but she faced internal opposition within the foreign ministry for being too pro-Israel. Bercovici is Jewish and a self-described supporter of Israel.

The Harper Conservatives faced frequent criticism that they were too pro-Israel in their Middle East stance, and vigorously rejected the long-held notion in Canadian diplomacy that Ottawa should see itself as an "honest broker" in the conflict between the Jewish state and the Palestinians.

Bercovici's lawsuit alleges she was unwelcomed by the bureaucracy from the moment she was appointed. She was "not only unsupported in her role, but the individual named Defendants as well as countless others within the Public Service, intentionally and maliciously waged a campaign of abuse" against her.

After the Liberals fired her in mid-2016 — as they were entitled to do — Bercovici alleges the government withheld almost $32,000 in pension benefits. She is suing for that amount, as well as millions of dollars in punitive and moral damages.

Bercovici's lawsuit alleges that she reached out to Telford repeatedly through emails and phone calls to deal with her pension issue, but was ignored each time.

In her lawsuit, she is seeking $250,000 in damages from Telford for the "intentional affliction of mental suffering."

The motion to add Telford and four senior Global Affairs Canada officials as defendants was filed in December and is to be argued in a Toronto court on Monday.

On Jan. 9, the Justice Department filed its reply with the court, arguing that there was no merit to adding five new defendants to the lawsuit.

"The Plaintiff's claims against the proposed individuals is frivolous and discloses no reasonable cause of action," says the factum filed by the Justice Department.

"The allegations made by the Plaintiff do not rise to the level of 'flagrant and outrageous' conduct. The Plaintiff has failed to plead any material facts to support her allegations of being 'sidelined', 'threatened,' 'undermined' or suffering 'personal attacks.' The Plaintiff makes bold allegations that are devoid of any particulars."

The long-simmering legal drama is unfolding as the Prime Minister's Office grapples with the resignation of Butts, who served as Trudeau's principal secretary and most trusted adviser.

Butts denied any impropriety but said he was becoming a distraction to the government amid swirling allegations that unnamed officials in the Prime Minister's Office put undue pressure on the former attorney general in a case involving engineering firm SNC-Lavalin.

Butts and Telford were the architects of Trudeau's rise to the Liberal party leadership and his subsequent 2015 election victory.

"We have pleaded that Katie Telford, a central figure in the PMO, purposely ignored repeated requests for immediate assistance and intervention with respect to the government's unconscionable withholding of Ms. Bercovici's pension monies," MacDonald told The Canadian Press.

"Our client was given no choice but to sue. Given what has come to light in Ottawa in recent weeks, we now question to what extent did the PMO direct the Attorney General to withhold Ms. Bercovici's pension monies."