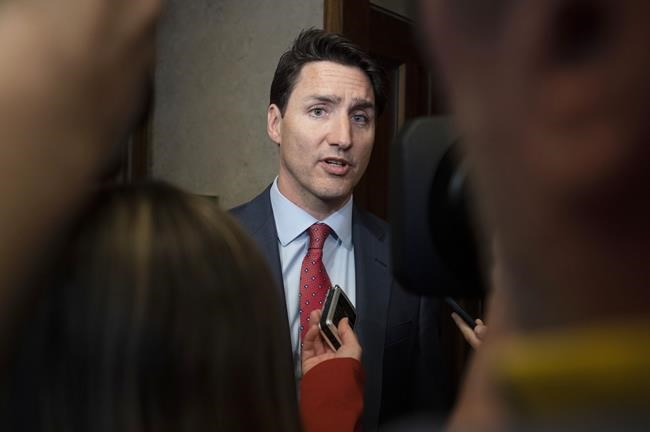 OTTAWA — With a federal election looming this fall, the Liberals and Conservatives are bracing for an ideological battle that pits the merits of balancing the books against spending on consumer confidence — and many Canadians may actually agree with both of them, a new poll suggests.

The Leger poll was conducted for The Canadian Press this week shortly after the government released its latest federal budget, which promises billions in new spending on measures like job retraining, services for seniors and incentives for first-time homebuyers.

The budget also leaves government coffers with average annual deficit of around $18 billion over the last four years — a far cry from the modest deficits and balanced 2019 books that Prime Minister Justin Trudeau promised during the 2015 election campaign.

The Liberals argue the spending is necessary to make a real difference in the lives of Canadians, while Conservatives accuse the government of wasting money and saddling future generations with unnecessary debt.

Both messages, however, resonated with Canadians, the Leger poll suggests: while a substantial percentage of respondents agreed the Liberal deficits were bad, many also expressed support for the centrepiece spending measures featured in Tuesday's spending blueprint.

Some 44 per cent of respondents said they believed the decision to run four years of deficits was the wrong call, while 20 per cent called it the right move and 35 per cent were not sure.

A large majority also voiced support for some big-ticket items in Tuesday's budget, including a plan to expand high-speed internet to remote and underserved areas of Canada, which garnered the support of 76 per cent of respondents, and a suite of measures to help workers to learn new job skills, which got a thumbs-up from three quarters of those polled.

Measures in the budget designed to make it easier for more Canadian families to buy their first home got a 68 per cent approval rating, while 55 per cent cheered proposed financial incentives to foster electric-vehicle sales.

As for the budget itself, 12 per cent of respondents said they were satisfied, while 19 per cent felt the opposite. The remainder of respondents either said they didn't know, or remained neutral — an amorphous body of swing votes the parties will no doubt be courting as the election clock ticks down to October.

"If you're the Liberals, the clear story is to say: 'Well, we needed to go into deficit to help the economy and do all of these great things that you agree with,'" said Leger executive vice-president Christian Bourque.

"The story for the Conservatives is to say: 'It's not right. We can't do this, period.' So I believe we'll hear a lot about not necessarily the budget, but about public finances more generally in the weeks to come. And I think that will be a ballot-box question."

Leger's internet-based survey, which cannot be assigned a margin of error because online polls are not considered random samples, was conducted March 19 and 20 using computer-assisted web-interviewing technology.

It heard from 1,513 Canadians who are eligible to vote and were recruited from the firm's online panel. The results were weighted to reflect age, gender, mother tongue, region and level of education to reflect the makeup of Canada's population.

The poll also suggested the Liberals have been bleeding support over the past month as the government struggled to contain the damage caused by the ongoing SNC-Lavalin affair.

Overall, 31 per cent of respondents polled said they would vote for the Liberals if an election were held now, a decline of three percentage points from February and a total loss of eight percentage points since November.

Yet while 37 per cent said they would back the Conservatives — a one-point bump from February and four-point increase since November — Bourque said most of the gain has come from voters in the West and may not translate into a big gain of seats in Parliament.

The NDP and Greens, meanwhile, saw their support increase by two points from February to 14 and 10 per cent, respectively, which Bourque said could represent trouble for the Liberals.

Conservative Leader Andrew Scheer also jumped ahead of Prime Minister Justin Trudeau on the question of who would make a better prime minister, earning the support of 25 per cent of respondents, compared with 24 per cent for Trudeau.

NDP Leader Jagmeet Singh, who made his debut in the House of Commons this week, stood at eight per cent while Green party Leader Elizabeth May was supported by seven per cent of respondents. People's Party of Canada Leader Maxime Bernier came in at four per cent.

The results are surprising, said Bourque: none of the leaders are as popular as their parties, which suggests that while the shine may have come off Trudeau, that popularity has yet to migrate to anyone else.

"It's as if right now there is a bit of a void in terms of leadership," Bourque said.

"There's not one clear person who's driving support like Jack Layton did in 2011, like Justin Trudeau did in 2015 … who is kind of pulling support up for their political party."

Note to readers: This is a corrected story. An earlier version gave incorrect figures for the percentage of respondents supporting the NDP and the Green party.