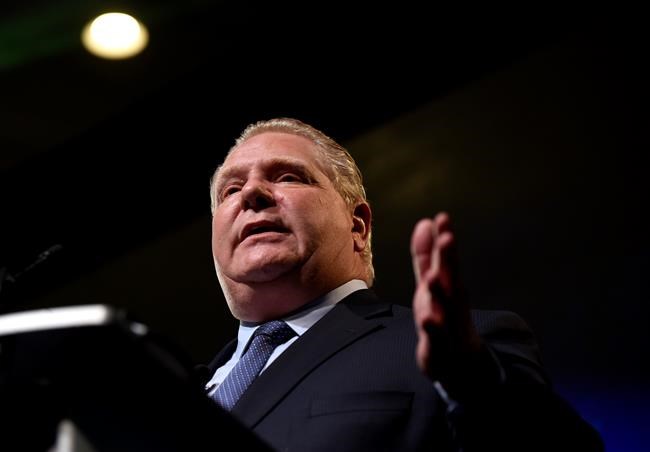 The Ontario premier told a conference of conservative thinkers, strategists and politicians Saturday that journalists are "losing the battle" to inform people about the news.

Speaking at the annual Manning Networking Conference, Ford accused journalists of being "far-left" and intent on distorting the messages of politicians.

"I get along with them one-on-one, I really do," Ford told the crowd.

"I like them but it's like the cheese slipped off the cracker with these guys and they just went far-left."

"But guess what? Now there's social media so we're circumventing the media through our social media."

He boasted that his campaign website "Ford Nation Live" got 18 million hits — purportedly more than all the mainstream television news networks combined. And as premier, he said they're continuing that approach through the Ontario News Now website.

"They want to take what you said and clip and chop and twist it around but we went direct to the people. And they know they're losing the battle," Ford said.

Attacking the media is a favourite ploy of U.S. President Donald Trump, but Ford insisted he's no Trump.

"Down in the U.S., it's absolutely booming and, just my opinion, when the U.S. is booming, Canada is booming," he said.

"You couldn't ask for a better neighbour anywhere in the world than the United States of America."

Ford also reiterated his vow to fight tooth and nail against the federal Liberal government's plan to impose a carbon tax in Ontario, starting next month. Ontario is one of four provinces that has refused to meet the federal threshold for putting a price on carbon so the federal government is imposing its own tax, the revenue from which is to be rebated directly back to residents in those provinces.

Ontario, along with Saskatchewan, Manitoba and New Brunswick, are fighting the tax in court.

"The carbon tax is a tax with the word carbon in front of it and it does absolutely nothing for the environment, nothing at all," Ford said, arguing that Ontario is being penalized even though it is "leading the country" in reducing carbon emissions.

"Everything you do is going to cost more," he predicted.