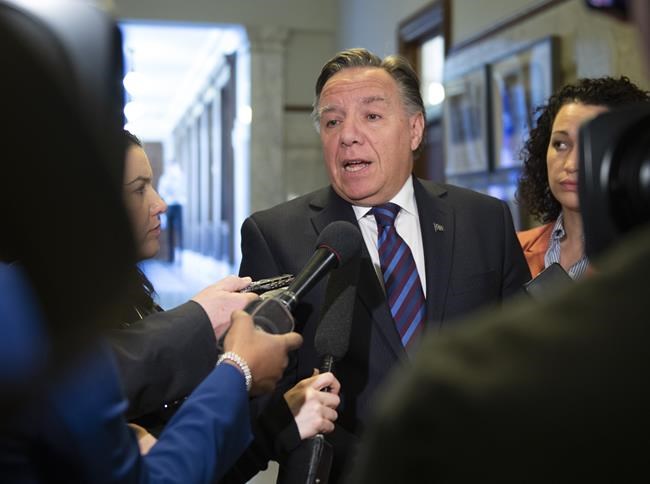 In B.C. on Wednesday, where gasoline prices soared above $1.70 per litre in Metro Vancouver, Kenney's promise to use Alberta legislation to "cut off the taps" produced varying opinions from experts who say it's either bluster or a weapon to punish the province for its opposition to the Trans Mountain pipeline expansion.

B.C. Premier John Horgan said he spoke with Kenney Wednesday and the tone was cordial.

"We had a positive conversation," said Horgan at a news conference in Prince George, B.C. "We agreed we will meet in the short term."

Kenney will be at a First Ministers gathering in Saskatoon in the coming months where the two leaders can meet, said the B.C. premier.

Horgan had appeared more doubtful about Kenney's election promises in the final days of the Alberta campaign.

"During election campaigns, quite often, political leaders speak hyperbolically," he said Tuesday at a public event. "They are overly aggressive. They focus on trying to pander to the lowest common denominators. I think Canadians want to work together to meet the challenges of climate change."

David Black, a political communications expert at Victoria's Royal Roads University, said he expects Kenney to make good on his pledge to proclaim and attempt to use the powers of Bill 12, Preserving Canada's Economic Prosperity Act.

"It will be a test of this government's willingness to turn the campaign rhetoric into political reality," he said. "All that was promised about a war footing and a war room, and a kind of actively belligerent UCP government, that will materialize if Bill 12 is made law."

Kathryn Harrison, a political scientist at University of B.C., said a constitutional court battle between B.C. and Alberta will ensue if Kenney attempts to shut the taps.

"This is mostly bluster at this point," she said. "It's still a step removed from actually using it to restrict oil supply to B.C. To do that now, before B.C. has acted on its own legislation, while we're awaiting the court's ruling on the constitutionality of B.C.'s law, and with federal approval pending, would hurt the Alberta industry for no clear purpose."

"What I am saying is there is no social acceptability for a new oil pipeline in Quebec," he said.

However, Legault said Quebec is open to a proposed natural gas pipeline coming from Alberta.

Kenney said Alberta's economy is desperate for pipelines that can carry oil to international markets.

Speaking in French on Tuesday night after his victory, Kenney said his province needs pipelines for the prosperity of all Canadians.

Ford stood in the legislature Wednesday to congratulate Kenney, with the rest of the Tory caucus rising for a standing ovation.

"We see just a blue wave going across this country from west to east," Ford said. "We're building an anti-carbon tax alliance like this country has never seen."

Kenney's victory adds strength to the conservative movement across Canada as a fall federal election approaches, both Black and Harrison said.

"Jason Kenney represents at a national level the person who is best positioned to articulate a conservative Canada," said Black. "If we're looking at some kind of fundamental axis between a conservative Canada with all their provincial governments, including the CAQ in Quebec, ... Kenney will become the voice for that Canada."

— With files from Graeme Hamilton in Montreal and Allison Jones in Toronto.