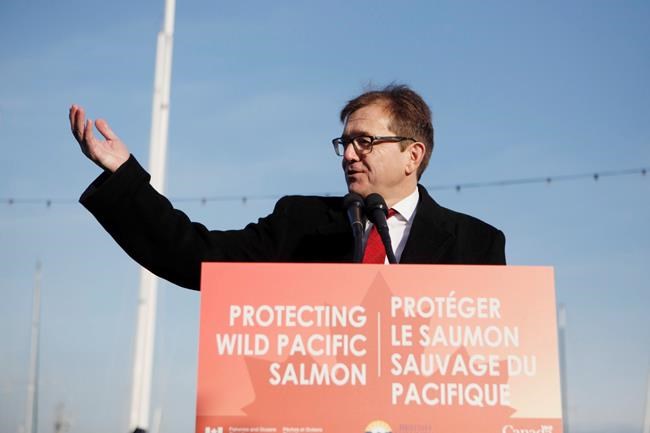 OTTAWA — The oil-and-gas industry has worn out its welcome in Canadian marine conservation areas, and Canada's environmentalists are overjoyed.

The change implements recommendations made to the government last year by an advisory panel, and brings Canada up to international standards set by the International Union for Conservation of Nature.

"The new standards that I'm announcing today will help to ensure that we will be able to provide an environmental inheritance to our children and our grandchildren that includes healthy, sustainable and productive oceans," said Wilkinson.

He was speaking at an international nature summit Canada is hosting in Montreal this week to push other countries to do more to protect the global environment.

"I'm at a bit of a loss for words so here it is in emojis," she wrote, followed by emojis of trophies, clapping hands, whales and noisemakers with confetti.

The industrial-activity prohibition includes the new Laurentian Channel Marine Protected Area off the south coast of Newfoundland and Labrador. In 2017, proposed regulations for the area would have allowed oil-and-gas development in 80 per cent of the channel, which caused a significant outcry from the public.

The government received more than 70,000 submissions demanding Canada make some marine areas off-limits to development. Wilkinson said the Laurentian Channel will be the first marine protected area to use the new standards.

The new standards will apply only in federally protected areas. Up until now industrial activities have been allowed or restricted on a case-by-case basis.

There are two existing marine protected areas where exploration companies hold oil-and-gas discovery licences: the Tarium Niryutait protected area off the Northwest Territories and the Gully protected area off Nova Scotia. Wilkinson said those licences won't be immediately cancelled but will be reconsidered when the management plans for each come up for regular reviews. Neither has active exploration going on now.

It will be up to provinces to determine the standards for marine areas protected by provincial legislation.

The standards will also not apply in marine refuges, which are more numerous areas where governments impose fisheries closures, often to protect just a single species. Some still allow oil-and-gas operations. The ones that do will not be counted towards Canada's commitment to protect 10 per cent of the country's marine and coastal areas by 2020.

With the new 11,600-square-kilometre Laurentian protected area announced Thursday, Canada has now hit 8.27 per cent on its quest to get to 10 per cent, and more than half of that is in refuges. In 2015, Canada had protected only about one per cent.

Wilkinson said no refuges will be removed from that total at the moment.

Oceana Canada, a charity devoted to protecting ocean life, raised concerns that four months after Canada named the Northeast Newfoundland Slope Conservation Area — a 47,000-square-kilometre section of the Atlantic Ocean — as a marine refuge in 2017, it agreed to allow oil-and-gas exploration in the same area. That decision also angered local fishers since the designation barred all fishing in the name of environmental protection.

In a statement, Oceana Canada called the new standards a good step forward.