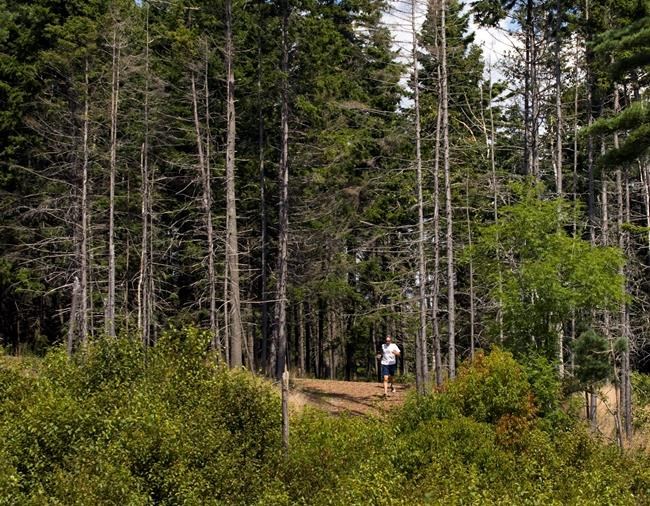 HALIFAX — A popular seaside park in Halifax will see an estimated 80,000 trees cut down this summer as part of ongoing restoration efforts in the aftermath of Hurricane Juan more than 15 years ago.

Point Pleasant Park was hit by the loss of more than 70,000 trees when the Category 2 storm blew through the Halifax area and across central Nova Scotia in late September 2003.

Brendan Elliott, a spokesman for the Halifax Regional Municipality, said a comprehensive plan was developed for the park in the years following Juan to ensure the forest returned to health.

"This is the right time to start looking at where the maintenance needs to take place," Elliott said. "We now have growth that we can look at and say, 'Here's where the heavy growth is, and here is where we need to do thinning and trimming.' "

Elliott said smaller trees will be felled in a selected 10-hectare area this summer to allow room for larger, healthier trees to flourish. He said it's estimated there are about 100,000 trees in the section to be worked, and the plan is to leave 20,000 standing.

"This will be substantial," Elliott said. "You will notice when this is done that there has been a cull of trees, but we are looking at quality here over quantity."

He said the idea is to help return the 75-hectare forested area of the park to its original Acadian forest condition. The Acadian forest region is populated with species such as red spruce, yellow birch, balsam fir and sugar maple. Associated species include red pine, eastern white pine, eastern hemlock and beech.

Tender documents released by the municipality call for the cutting of a combination of 11 different hardwood and softwood species including Norway maple, sycamore maple, silver maple, Norway spruce, Scotch pine and Douglas fir. The city expects this year's cutting to be finished by the end of July.

"Once we remove the smaller, weaker trees, it exposes the rest of the trees to more sun and then actually exposes them to wind as well, which then increases the strength of their trunks and their root system, so that if we ever had another situation like Juan, the trees would be in better shape to survive," he said.

The plan is to cut another 10 hectares a year over the next two years in different areas of the park, although the exact number of trees to be cut hasn't been determined.

Elliott said the trees cut down will be left to decompose in order to provide nutrients for the remaining forest.