‘It’s hard to think about them’: Emotions run free as Canadians mark D-Day 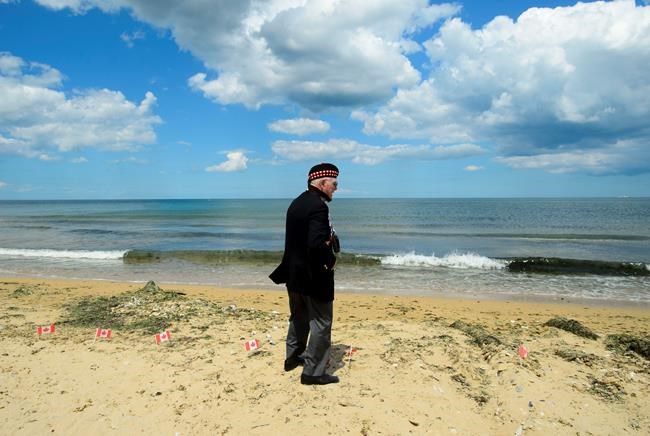 COURSEULLES-SUR-MER, France — Joseph Edwardson couldn't hold back the tears. Exactly 75 years earlier, Edwardson and thousands of other young Canadian men had come ashore on this very beach in northern France to begin the long-awaited liberation of western Europe from Nazi Germany. Many of those men would not see the next day.

"It's hard to think about them," an emotional Edwardson, now 95, said as he stood in the sand near the spot where he pulled himself out of the water on D-Day. He had been forced to dive from his landing craft and swim to shore in the face of German machine-gun and artillery fire.

Edwardson was one of a handful of surviving veterans from D-Day and the battles in Normandy to return to the stretch of coastline now known as Juno Beach to mark the 75th anniversary of that moment, a turning point in the Second World War.

Joining them here were thousands of Canadians representing various ages and communities, united in honouring the bravery and sacrifice of the men like Edwardson who, as young men from places like Revelstoke and Red Deer, Smiths Falls, Trois-Rivieres and Glace Bay, had found themselves in Europe fighting against tyranny.

Two ceremonies were held on Juno Beach on Thursday, the first of which was an entirely Canadian production while the second included representatives from more than a dozen countries that played parts on D-Day.

"While it is far from perfect, every generation has since strived to build on what began more than 75 years ago," Prime Minister Justin Trudeau told the assembled veterans, dignitaries and observers during the international ceremony, which included France's Prime Minister Edouard Philippe and Nancy Pelosi, the Speaker of the U.S. House of Representatives.

Fourteen thousand Canadian soldiers came ashore on D-Day. For many, it would be their first taste of combat. For some, it would also be their last. Even three-quarters of a century later, the pain of that reality continues to hurt the few veterans still alive today, particularly when they visit the beach and tour the cemeteries where their friends are buried.

"It didn't used to be hard, because when you're younger it didn't affect you and you didn't think about that," said Art Boon, who was with the first wave of artillery to land on Juno Beach on D-Day, as he stood on the beach. "But when you get older, you think about all the years they lost (and how) they weren't here to enjoy the freedom that they helped get."

Unlike 75 years ago, when Canadian, British and American soldiers braved stormy waves as well as machine-gun fire as they struggled to reach land, the weather on Thursday was largely calm, almost benevolent. A cool breeze bearing a tinge of ocean scent wafted through under a cloud-studded sky as the experience of D-Day was remembered.

In many ways, the Canadian ceremony was one of contrasts to that terrible day. Music and speeches replaced the deafening sounds of gunfire, explosions and screams. Out to sea, a single Canadian frigate, HMCS St. John's, stood a silent guard where hundreds of battleships, destroyers and landing craft had pounded the shore and carried troops to the battle.

And there were the young people, hundreds of them, many of them cadets and serving Canadian Forces members, reminders that the aged veterans sitting in the first row hadn't always been old men.

Some of those service members stood on the sand dunes for the duration of the 90-minute Canadian ceremony with bowed heads, metres from where some of their forebears had fought and died. Many, such as Cpl. Wyatt Keenan, were awestruck by the importance of the occasion.

"It's a pretty humbling experience knowing that 75 years ago, what the guys before us were doing here," said Keenan, who is currently posted to Greenwood, N.S., adding that one of the emotional moments of the ceremony for him was when the French national anthem was played. "It's because of what happened here 75 years ago that the French get to sing that anthem."

During his address to the Canadian ceremony, Trudeau underscored the unity of purpose that brought together Canadians from coast to coast to coast on D-Day, as well as the example their actions during that bloody day — in which 359 Canadians were killed and another 715 wounded or captured — set for future generations.

"We thank them not only for their sacrifice, but for their example," Trudeau said. "For inspiring countless young men and women to answer the call of duty like they once did. For teaching us the value of service. For showing us the true meaning of honour. We thank them for leaving us a better world than the one they once inherited."

Philippe, France's prime minister, said D-Day strengthened the enduring friendship between Canada and France, which continues to this day in the face of contemporary challenges such as the Islamic State of Iraq and the Levant and climate change, before concluding: "It's hard to say anything else but 'Thank you.' "

"We've had wars since before biblical times. Even the cavemen fought against each other," said 98-year-old William Tymchuk. "It's human nature to fight. But eventually I think we'll learn our lesson. I just don't know when."