‘We the real North:’ hoops fans in the High Arctic cheer on the Raptors 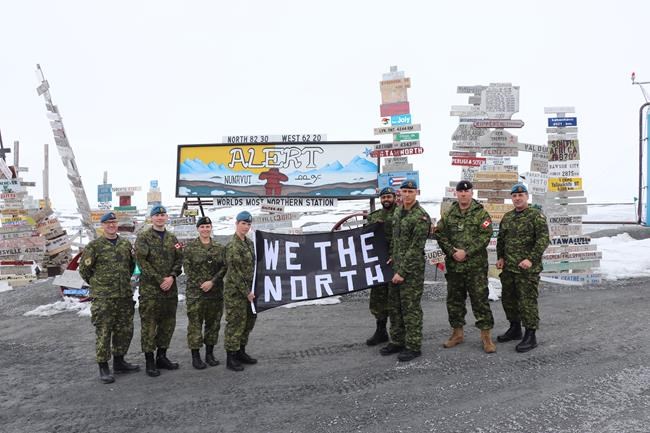 In the tiny hamlet of Cambridge Bay, Nunavut, more than 3,000 kilometres northwest of Scotiabank Arena, the Toronto Raptors' famous slogan takes on a whole new meaning.

"One of our big jokes is the line 'We the North.' And up here we kid, 'We the real North,'" said Paula Cziranka, a high school teacher in the remote community that's home to roughly 1,600 people — less than a tenth of the capacity of Scotiabank Arena.

In a phone interview Sunday ahead of Game 5 of the NBA Finals between the Raptors and Golden State Warriors, Cziranka said nearly everyone in town was awaiting the outcome with "bated breath."

With the High Arctic community currently experiencing near-constant daylight, Cziranka said there are usually children playing outside and people milling around town at all hours — but not during a game.

"I was heading over to my son's house to watch (Game 4 last Friday), and as I was going over to his place, there was absolutely nobody out on the street," she said. "We were all inside watching the Raptors play."

The team's popularity has exploded over the course of its first-ever run to the final this year, with outdoor viewing parties drawing capacity crowds from Halifax to Regina and beyond — well beyond.

Another 1,800 kilometres northeast of Cambridge Bay — or about as far from Toronto as Bogota, Colombia — lies Canadian Forces Station Alert, the most northerly permanently inhabited place on Earth.

Life in such an isolated locale can be challenging, so the station's rotating personnel do whatever they can to keep up morale; lately, that's meant watching Raptors games on one of the two television channels available.

Lt. Jevin Jeyaveerasingam with the Royal Canadian Air Force has been posted to Alert since December. He calls it a "remarkable experience," comparing the outpost's close-knit crew to a family.

Jeyaveerasingam said he's been a Raptors fan for years, and he's enjoyed sharing the team's historic run to the final with his "family" at the top of the world.

"It's a group of us watching it most of the time, so we're all watching it together, we're on our toes," he said, adding that the station's limited internet bandwidth often adds to the tension of the games' biggest moments.

"In the fourth quarter it drops out sometimes," he said with a laugh, "but it always comes back."

Jeyaveerasingam said it's been especially meaningful to watch from what he called "the tip of Canada" as the country comes together to cheer on the Raptors.

The team "being able to represent Canada, from here all the way down to where the rest of the fans are, it's really remarkable," he said.

It remains to be seen whether the Raptors' appeal north of the Arctic Circle will continue past this dream season, but Cziranka said basketball itself will endure.

The sport has been a "big deal" in Cambridge Bay for years, she said, thanks to the efforts of a few dedicated volunteers: local kids often get started in elementary school, and a men's team from "The Bay" has won the prestigious Arctic Shootout tournament in Yellowknife for two years running.

"It's good because basketball's an indoor sport. And being in the Arctic, we have a lot of time to be inside," she said.