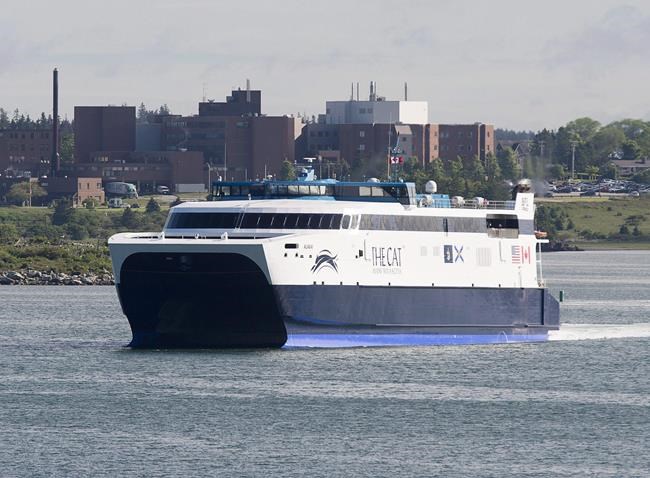 HALIFAX — It's an open question whether a heavily subsidized ferry will actually sail this summer between Nova Scotia and Maine, a provincial cabinet minister acknowledged Thursday.

Business Minister Geoff MacLellan said there is still no definitive startup date from U.S. Customs and Border Protection, which requires specific renovations to the terminal building in Bar Harbor, Maine, before putting agents in place to process ferry passengers.

"Without a definitive date, I guess that's the conclusion that can be drawn," MacLellan told reporters following cabinet when asked whether the season could be in jeopardy.

Two weeks ago, the ferry's private operator, Bay Ferries, had said a season that was scheduled to begin at the end of June would commence "in the mid-summer" because of delays in satisfying security requirements in Bar Harbor.

MacLellan wasn't prepared to guarantee the ferry would sail at all in 2019. "Obviously we can't (say) until they give some kind of timeline in terms of how quick they can turn this over," he said. "So far, the communication from border services has been, 'As soon as we can.' "

U.S. Customs and Border Protection did not immediately respond to a request for comment Thursday, and Bay Ferries simply confirmed the uncertainty around when changes at the terminal would be approved.

"There is no set timeline as it is dependent on the ongoing approvals process," the company said in an email. "They (border services) have not established or indicated any set dates."

The province has committed an estimated $8.5-million to help with the renovation work in Bar Harbor and the ferry's operating subsidy for this year is $13.8-million. Bay Ferries moved its Maine port from Portland to Bar Harbor earlier this year, saying it would save in fuel costs because it's closer to Yarmouth.

The province also recently hired former U.S. ambassador to Canada David Wilkins to lobby on behalf of the ferry in an attempt to expedite the U.S. security process at a cost of US$10,000 a month.

MacLellan said Wilkins is working with the U.S. senators from Maine, Angus King and Susan Collins, along with U.S. House Representative Jared Golden on the file.

The minister said the Wilkins hiring was made by provincial Treasury Board following a call he received earlier this month from Paul LaFleche, the deputy minister of transportation. MacLellan said the call suggested there were issues with the potential start of the season because of the border services issue.

In an email, the Transportation Department said the ferry is currently in Charleston, S.C., where it typically spends the winter to refit. It said it is scheduled to leave for Yarmouth on Friday.

The Liberal government has argued the ferry subsidy is essential in order to support tourism and the struggling economy in southwestern Nova Scotia.