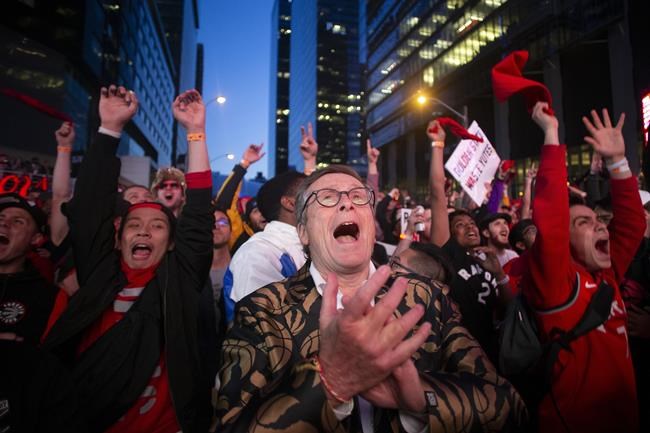 TORONTO — City staff in Toronto will no longer take down public basketball hoops at the end of the day, the mayor said Thursday after a video showing a municipal worker dismantling a net sparked widespread backlash online.

The clip posted to Twitter a day earlier saw many note that Toronto is home to the Raptors, who recently became NBA champions following an electrifying playoff run that united fans across the city.

Mayor John Tory said the city should be encouraging kids to play the sport and noted that he had personally asked the recreation department to stop taking down nets on municipal courts at the end of the day.

"I opt in favour of positive, fun, healthy activities for kids in our neighbourhoods," he wrote. "In some parks, staff were taking down basketball nets at the end of the day ... They have suspended this practice immediately."

A statement from the city said it has long sought to balance players' right to enjoy a game of hoops, with the rights of nearby homeowners to enjoy some peace and quiet.

"But removing basketball hoops at 6 p.m., as we saw in the video posted last night, is not reasonable," it said Thursday. "Staff will monitor noise complaints the city may receive on a case-by-case basis in an attempt to ensure everyone is free to enjoy both their parks and their backyards."

It shows a young player dribbling a ball as one net is taken down, then pans to a group of young players lamenting the hoop's removal.

One of them jokes, "I can still have just as much fun out here," as he proceeds to dribble to a rimless hoop and slam the ball off the backboard.

Canada Basketball, the governing body of the sport in the country, responded with the message "No rim. No history," along with a photo of star Raptors player Kawhi Leonard's rim-hugging buzzer-beater in the NBA playoffs. The picture of the iconic shot that beat the Philadelphia 76ers in the second round was subtly edited to remove the rim.

The Raptors went on to win their first championship in franchise history, galvanizing fan support across the country and raising the sport's profile in a city long considered a hockey mecca.

"Everyone deserves the chance to play," Canada Basketball tweeted. "Keep the nets up."

When asked earlier this week about the prospect of basketball nets being removed on a nightly basis, Raptors president Masai Ujiri was shocked.

"There's been complaints about noise from basketball? Really? They tried to take the courts down? Are you guys serious," Ujiri said Tuesday.

"I don't know what the details of this is, but my first reaction is anywhere there's a basketball court is a good thing. Kids play basketball. It's my job so I'm going to be biased toward basketball — however it's played, anywhere it's played, whether it's the noisiest place or the most quiet place."